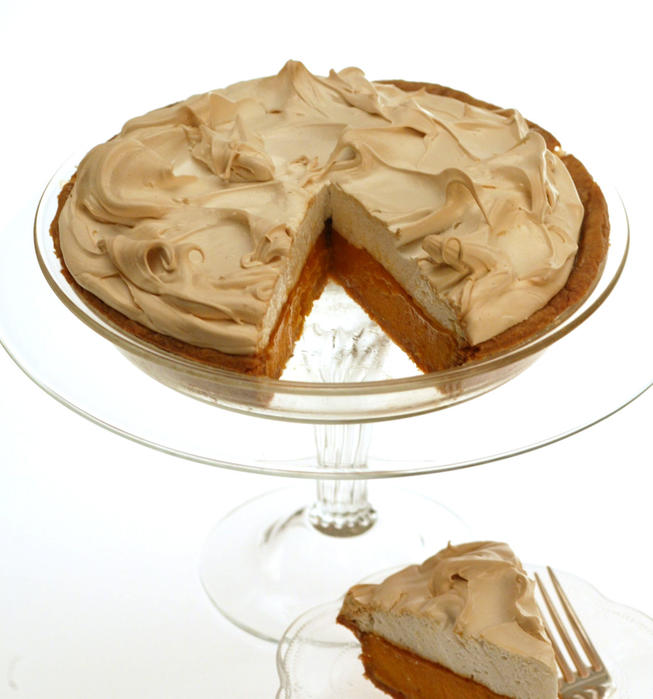 Step 1 Heat the oven to 325 degrees. Roll out the pie dough one-fourth-inch thick, cut it into an 11-inch circle, and fit it into a 9-inch pie plate, allowing the extra dough on the edges to hang over. Chill for 30 minutes.

Step 2 Trim the dough to the edge of the plate. Spray the surface of the dough lightly with vegetable spray. Line it with coffee filters or a circle of parchment paper and fill it with pie weights. Bake for 50 to 55 minutes. Remove the weights and bake until golden brown, about 20 more minutes. Remove from oven; set aside.

Step 3Increase the oven heat to 375 degrees. Slice the squash and yam in half lengthwise and remove the seeds from the squash. Place them in a glass baking dish and sprinkle with 1 1/2 teaspoons salt and the pepper. Cut 8 tablespoons (1 stick) butter into small pieces and divide it between the yam and squash, pressing it into the surfaces (place most of the squash's butter into the cavity). Sprinkle with one-fourth cup plus 2 tablespoons brown sugar. Place in the oven. Baste every half an hour with the melted butter mixture. Bake until tender, about 1 hour for the yam and at least 1 1/2 hours for the squash. Remove from oven and set aside to cool.

Step 4Reduce the oven heat to 300 degrees. Melt and cool the remaining 2 tablespoons of butter. Scoop the meat from the yam and squash and puree until smooth in the food processor. Add the melted butter, 2 eggs, 2 egg yolks (save the whites for the meringue), milk, cream, the remaining one-half cup brown sugar, 2 tablespoons sugar, one-fourth teaspoon salt, cinnamon, nutmeg and clove. Puree until very smooth.

Step 5Pour the custard into the pre-baked pie shell and bake until the center just slightly wiggles when moved, about 1 hour. (Pour any extra into ramekins and bake to the same point.)

Step 6Increase the oven heat to 325 degrees. In a small saucepan, combine the remaining three-fourths cup sugar and the water. Add one-fourth cup plus 2 tablespoons maple syrup and the corn syrup. Cook on high heat, washing down the sides with a pastry brush, for 6 to 8 minutes, until the soft-ball stage, or until a candy thermometer reads 238 degrees. Remove from heat.

Step 7Pour the egg whites into a mixing bowl. Using high speed on an electric mixer, whip the whites to medium peaks. With the mixer running, add the cornstarch and one-fourth teaspoon salt, then continue whipping just until the peaks are firm and shiny. Turn the mixer to low, then slowly stream in the hot syrup. Whip for 1 to 2 minutes on high until the meringue is glossy and shiny, marshmallow-like in texture and holds firm peaks. Fold in the remaining tablespoon of maple syrup.

Step 8Spread the meringue onto the top of the warm pie, creating lots of peaks and valleys. Bake until the peaks of the meringue are dark golden, 30 to 35 minutes.