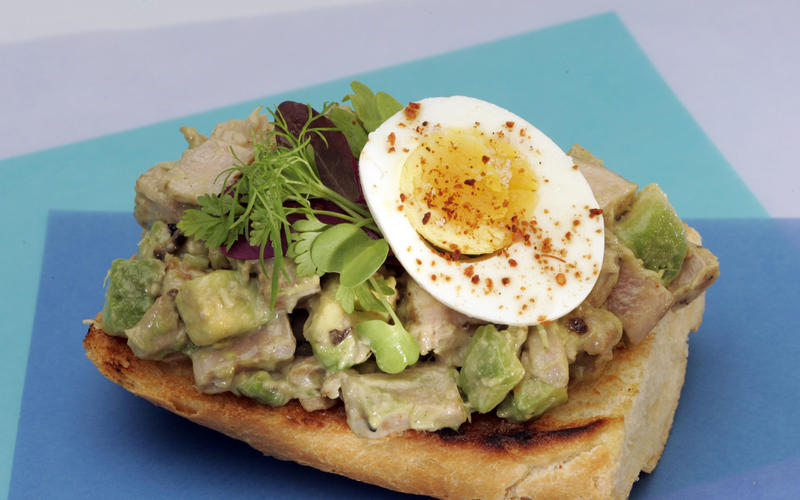 Step 1 Rub the surface of the tuna with 1 teaspoon olive oil, then sprinkle with one-half teaspoon salt and the black pepper. Let the tuna stand at room temperature for about half an hour before grilling.

Step 2 Sprinkle 1 teaspoon salt over the garlic on a chopping board and mince. With a wire whisk in a medium-size bowl, beat the egg yolks until foamy and a little sticky, about 1 to 2 minutes. Beat in the minced garlic with salt and then the lemon juice.

Step 3Slowly beat in the olive oil a few drops at a time in the beginning, then slowly begin adding what remains of the one-half cup of olive oil and the one-half cup canola oil in a thin stream while beating the entire time. Beat in the one-quarter teaspoon Aleppo chile. Set aside the finished mayonnaise until you are ready to put the salad together.

Step 4Heat a grill pan over high heat and grill the tuna for 2 to 3 minutes. The center should be slightly pink. Let the tuna cool slightly before cutting the tuna into one-half-inch cubes.

Step 5In a large bowl, mix the green onions, chopped Moroccan black olives, the tuna and enough mayonnaise to moisten the salad. Stir in the avocado just before serving. Divide the tuna mixture onto a toasted baguette. Top each with about 1 tablespoon of microgreens and a slice of boiled egg. Sprinkle a little fleur de sel and Aleppo chile over the egg. Serve immediately.