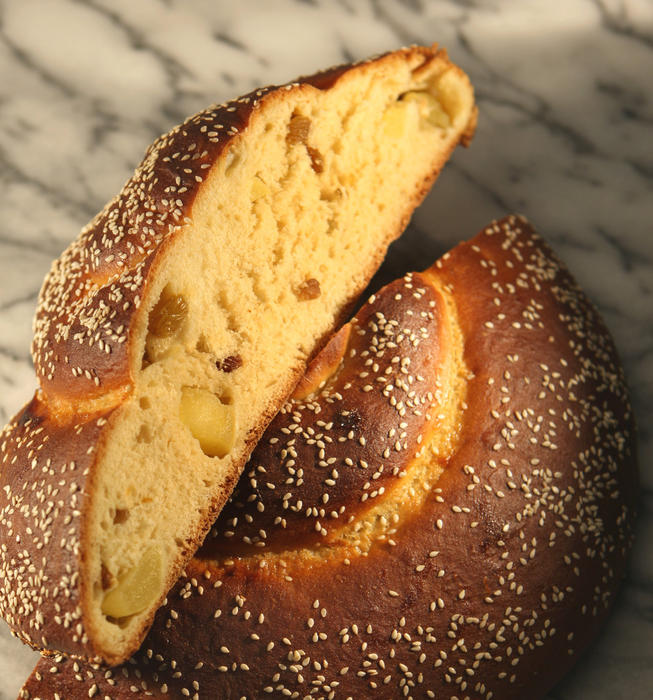 Step 1 In the bowl of a stand mixer using a whisk attachment, combine the yeast, one-fourth cup flour and the warm water, whisking until smooth. Set aside until the yeast begins to foam, about 10 minutes.

Step 2 Whisk in one-fourth cup honey, the oil and 2 eggs until well-incorporated. In a separate medium bowl, sift together the remaining flour with the salt and sugar.

Step 3Replace the whisk with the dough hook and begin mixing at low speed. Add the flour mixture, 1 spoonful at a time, until all is incorporated. Mix the dough for 6 to 8 minutes at medium-low speed to develop the dough; it will be very wet and sticky and will not form a ball. Remove to a well-floured surface and gently knead, adding a little flour at a time (up to one-half cup), until the dough is elastic, soft and only slightly sticky, 1 to 2 additional minutes. (The more flour you incorporate, the firmer the dough, resulting in a denser final loaf.)

Step 4Place the dough in a large, clean, oiled bowl and cover it with a kitchen towel or with a loose sheet of plastic wrap. Set the bowl aside in a warm place until the dough is doubled in size, 1 to 2 hours.

Step 5While the dough is rising, prepare the apples. Peel and core the apples, then cut each into 8 slices. Cut each slice crosswise into 4 pieces. Toss the apples with the lemon juice to prevent them from coloring. You should have 1 3/4 cups diced apple (discard any extra apple).

Step 6Whisk the remaining egg and teaspoon of honey in a small bowl to form the egg wash.

Step 7Roll the dough on a well-floured surface into a long strand 2 1/2 to 3 feet in length and 6 inches wide. Scatter the apples and raisins over the length of the dough, then roll the dough crosswise over the apples (as with cinnamon rolls), and seal the ends with the egg wash.

Step 8To make the high-rising spiral shape common for Rosh Hashana, wind the strand to form a spiral (the tighter the spiral, the higher the final loaf), making sure the outer end of the spiral is tucked under to prevent it from unraveling while the challah bakes.

Step 9Place the challah on a parchment-lined baking sheet and brush it with the egg wash, then scatter the sesame seeds evenly over the top.

Step 1 0Cover the challah loosely with greased plastic wrap and proof until doubled in size, 1 to 2 hours. When the challah is almost proofed, heat the oven to 350 degrees.