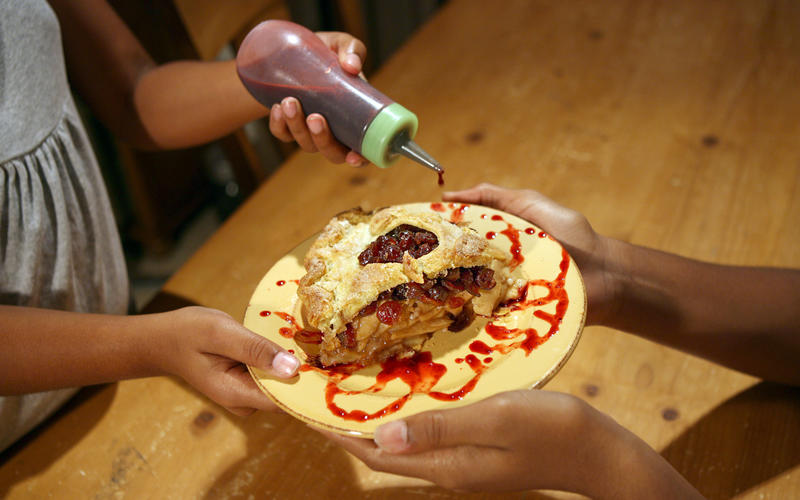 Step 1 In a large bowl, gently toss the apples with the lemon juice. Stir in the brown sugar, 1/2 teaspoon sea salt and cinnamon and set aside.

Step 2 Place the flour, remaining 1/2 teaspoon salt and zest of one orange in a food processor and pulse to combine. Cut three-fourths cup (1 1/2 sticks) butter into 1-inch cubes and add to the flour. Pulse to break up the butter. Whisk together the vinegar and egg yolk in a measuring cup with enough ice-cold water to bring the volume up to one-half cup. While pulsing, add the liquid in a steady stream until the flour looks crumbly and damp (be careful that the dough does not overmix and form a ball). The crumbs should adhere when you press them together. Turn out the dough onto plastic wrap and press into 2 disks, one slightly larger than the other. Wrap each in plastic and refrigerate for 30 minutes to an hour.

Step 3In a small saucepan, place the cranberries, orange juice, maple syrup, remaining orange zest, vanilla bean and its scraped seeds, ginger, allspice and cloves and bring to a boil over high heat. Remove from the heat and cool to room temperature.

Step 4Heat a large saute pan over medium heat. Melt 2 tablespoons butter, then stir in the apple mixture. Simmer the apples for about 5 minutes until they are crisp-tender. Remove from heat and stir in the tapioca. Cool to room temperature.

Step 5Meanwhile, on a lightly floured surface, roll out the larger disk of dough into a circle no thicker than one-eighth inch and about 13 inches in diameter. Drape the dough over the pie plate. Roll out the second disk to a circle about 11 inches in diameter and place it on a piece of parchment on top of a cookie sheet. Using a cookie cutter or a paring knife or the base of a pastry tip, punch out decorative shapes in the dough: Cut leaves or berries, or let your kids make a big smiley face. Refrigerate each disc of dough for 20 minutes.

Step 6Fill the bottom of the chilled pie crust with the apple mixture. Remove the ginger piece and the vanilla bean from the cranberry mixture and spoon that mixture over top of the apples. Dot the top of the mixture with the remaining butter.

Step 7Beat the egg white with 1 tablespoon of water to form an egg wash and brush the edges of the pie shell with the wash. Carefully lift the layer of cutout dough from the parchment paper and cover the filled pie with it, pressing the edges down to seal. Crimp the edges of the dough into triangles or as desired. Refrigerate the pie, uncovered, for 15 minutes. Meanwhile, heat the oven to 400 degrees.

Step 8Lightly brush the top of the pie with egg wash and sprinkle on the sugar. Place the pie on the lowest rack of the oven and bake for 30 minutes. Reduce the temperature to 350 degrees and continue to bake an additional 20 to 30 minutes until the crust is golden brown and set. Check and rotate the pie as it bakes for even coloring. Remove and cool on a rack.