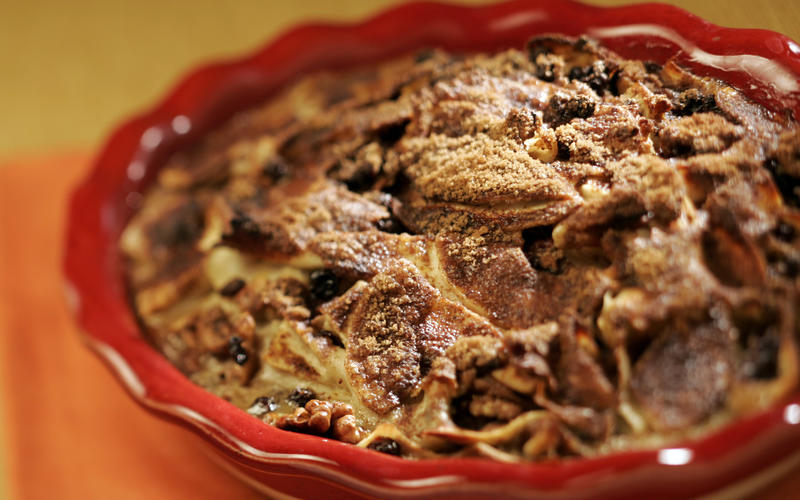 Step 1 Heat the oven to 350 degrees and bring a large pot of salted water to boil over high heat.

Step 2 Meanwhile, in a saute pan over medium heat, toast the walnuts until fragrant and slightly darkened, stirring frequently, 5 to 7 minutes. Set aside.

Step 3In a small saucepan, bring the cider to a boil. Remove from the heat and stir in the currants. Allow the currants to rehydrate until plump, about 15 minutes.

Step 4While the currants are softening, core and peel the apples. Thinly slice the apples lengthwise, and toss with the lemon juice in a medium bowl. Set aside.

Step 5Make the custard base: In a large bowl, whisk together the eggs and sugar. Whisk in the mascarpone, then the milk, lemon zest, vanilla, one-half teaspoon cinnamon and one-fourth teaspoon salt until well-combined. Set aside.

Step 6Cook the pasta in the boiling water just until tender, 1 to 2 minutes. Drain and allow to cool slightly in a colander. Add the pasta to the custard base, tossing gently to coat the noodles. Stir in the walnuts, currants (and remaining cider) and apples (with any remaining lemon juice).

Step 7Place the kugel mixture in a deep-dish pie pan or in a 12-by-9-inch baking dish.

Step 8Combine the brown sugar, nutmeg, allspice and remaining cinnamon in a small bowl. Drizzle the mixture over the kugel.

Step 9Bake the kugel until set and golden on top, 50 minutes. Cool slightly on a rack, then serve immediately.