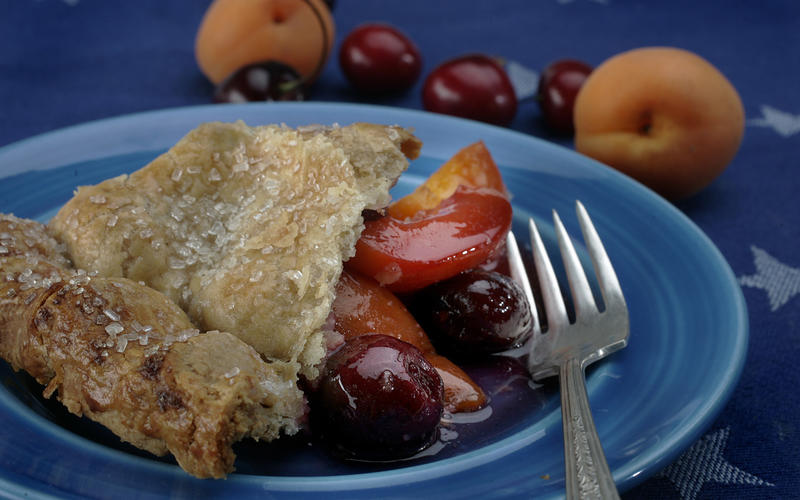 Step 1 Place the flour in a food processor with the salt and pulse to mix. Cut the three-fourths cup plus 2 tablespoons butter into 1-inch chunks and add them to the flour. Pulse four to six times to break up the chunks of butter. Combine the vinegar and egg yolk in a measuring cup and add enough ice water to bring the volume up to one-half cup. While pulsing, add the liquid in a steady stream until the flour looks crumbly and damp. You may not use all of the liquid (we used one-fourth cup). Between 25 and 30 pulses should be enough. Don't let the dough form a ball. The crumbs should adhere when you gather them in your hand. If not, add a few more drops of ice water. Divide the dough into two parts. Wrap in plastic wrap and refrigerate 30 minutes to 1 hour.

Step 2 Alternatively, the dough can be made by hand. Combine the flour with the salt in a large bowl. Cut the butter into 1-inch chunks and add them to the flour, using a fork, a pastry blender or your hands to break up the butter into the flour so the mixture resembles coarse meal. Combine the vinegar and egg yolk in a measuring cup and add enough ice water to bring the volume to one-half cup. Drizzle the liquid, a few tablespoons at a time, over the mixture and stir with a fork until the flour looks crumbly and damp. Again, you may not use all of the liquid. Combine the dough with your hands to form a single ball. Divide the dough in half and cover each half in plastic wrap. Refrigerate 30 minutes to 1 hour.

Step 3Heat the oven to 400 degrees. In a large bowl, lightly toss together the apricots and cherries. Use the tip of a knife to scrape the seeds from the vanilla bean onto the fruit and toss to coat. In a small bowl, mix the sugar and cornstarch and pour over the fruit. Toss to coat evenly. Stir in the lemon juice. Let stand while rolling out the dough.

Step 4Roll out half of the dough on a lightly floured surface into a 14-inch circle about one-eighth-inch thick. Roll the dough loosely around the rolling pin and carefully lift the dough onto a 9-inch deep-dish pie plate. Gently press the dough onto the bottom and sides of the pie plate, leaving the excess hanging over the edge.

Step 5Roll out the second round of dough into a 12-inch circle about one-eighth-inch thick. Use a 1 3/4 -inch round cutter to cut a circle out of the center of the dough. Using the same cutter, cut five other circles out of the dough around the large circle.

Step 6Fill the pie shell with the fruit and juices. Sprinkle over the remaining butter. Fold the second round of dough (with cut-outs) into quarters. Place the folded dough on top of the pie so that it is centered when you unfold it to cover the pie.

Step 7Pinch the edges of the dough together and fold the edges under to fit the pie plate. Pressing the rim of the dough between two fingers, flute the edges. Brush the crust with beaten egg and sprinkle with Demerara. Put the pie on a baking sheet and bake for