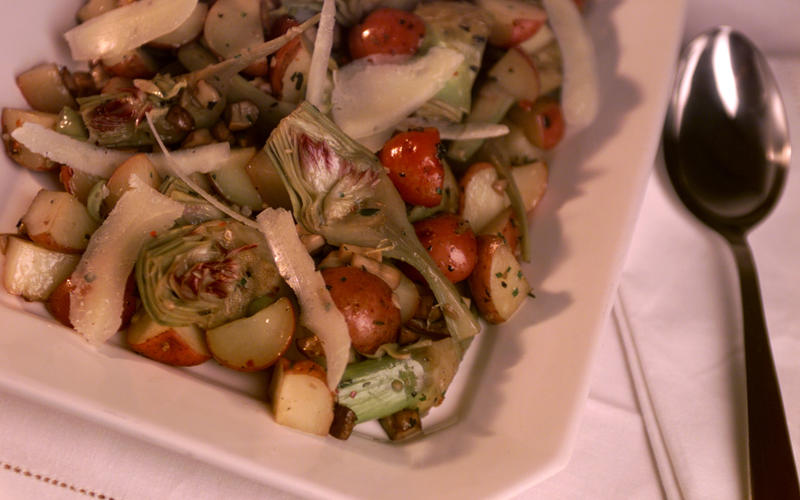 Step 1 Steam the potatoes over rapidly boiling water in a tightly covered pan just until tender, about 15 minutes. Remove from the heat and set aside.

Step 2 Combine the artichokes, 3 tablespoons of the olive oil, the water, 1/2 teaspoon of salt, garlic, red pepper flakes, thyme and rosemary in a large skillet. Cover tightly and place over high heat. Cook until the artichokes are just tender, 5 to 7 minutes. Remove the lid and continue cooking over high heat until all the liquid has evaporated and the artichokes begin to make a sizzling sound from frying in the oil. Stir frequently to keep the artichokes from sticking. Add the potatoes and reduce the heat to low.

Step 3In a separate skillet, heat the remaining 1 tablespoon of olive oil over high heat. When very hot, add the mushrooms and cook, tossing frequently, until they have given up their liquid and are beginning to brown, 3 to 5 minutes.

Step 4Add the mushrooms to the potatoes and artichokes and stir in the mint and the olives. Season to taste with salt. Remove the thyme and rosemary sprigs. Divide the stew evenly among 6 pasta plates or shallow bowls and garnish with the cheese by using a vegetable peeler to shave off thin strips over each bowl. Serve immediately