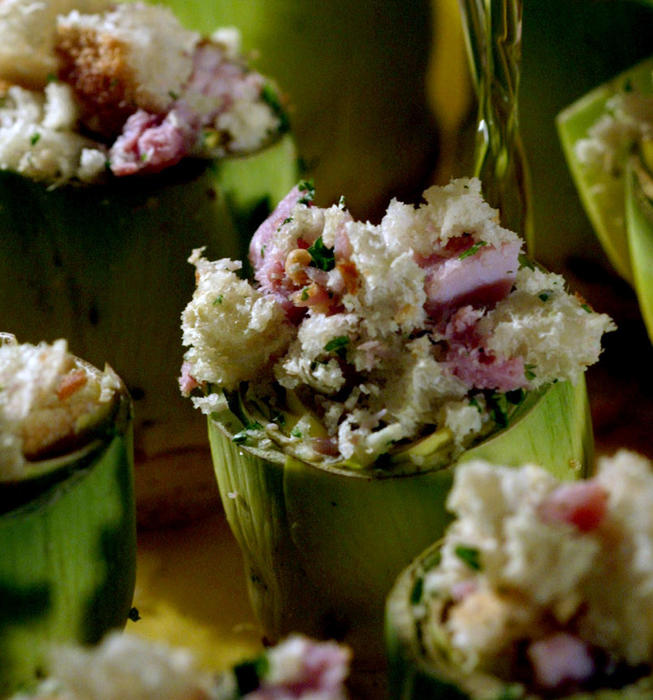 Step 1 Heat the oven to 350 degrees. Fill a bowl with water and squeeze the lemon over it. Set aside the squeezed-out lemon.

Step 2 Remove the tough parts of the outer leaves from an artichoke. This is best done by bending the leaf flat back and then pulling straight down, taking the tips of the leaves and much of the stringy fiber, but leaving the meaty bases. Work your way around the artichoke, until you come to leaves where the bases are tender and pale green. Use a large knife to cut off the dark green top by one-third.

Step 3Trim the stem of the artichoke with a paring knife, making a flat base and carefully peel away any tough dark green peel, exposing the tender pale surface. Rub the cut surfaces with the lemon half.

Step 5Place the cleaned artichoke in the bowl of lemon water and repeat with the remaining artichokes.

Step 6Mince the garlic by dropping it down the feed tube of a food processor while it's running. Stop the machine and add the bread cubes. Pulse 2 or 3 times. Add the ham and the parsley and pulse until both the bread and ham are in large crumbs, about 4 or 5 times. Remove the blade and stir in the lemon zest, pine nuts and salt.

Step 7Drain the artichokes (turn them upside down and spread the leaves) and fill the central cavity of each with some of the stuffing mixture, mounding it over the top and working a bit of it between the leaves. Arrange the artichokes in an oiled baking dish just large enough to hold them in a single layer.

Step 8Pour the wine into the bottom of the dish and add just enough water to come to a depth of about 3/4 inch. Cover the dish with foil and bake until the artichokes are tender enough that you can easily pull out one of the interior leaves (a knife will pierce the base easily as well), about 45 minutes.

Step 9Remove the dish from the oven and carefully pour the leftover liquid into a small saucepan. Bring to a boil over high heat and reduce to a thin syrup. Pour over the cooked artichokes and serve warm or set aside to cool to room temperature before serving.