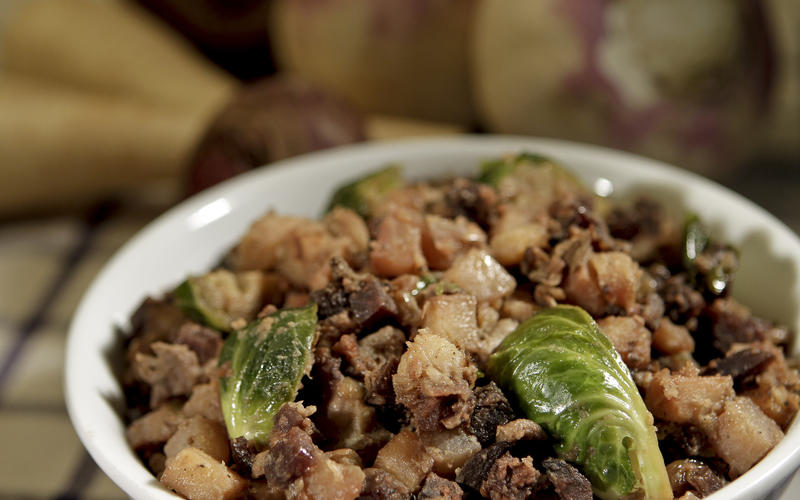 Step 1 In a large skillet over medium heat, melt the goose fat. Add the onions and garlic to the skillet and cook, stirring occasionally, until the onions are softened and have begun to turn golden, about 5 minutes.

Step 2 Stir in the sweet potatoes, spreading them out so they're spaced in an even layer in the pan. (The more of their surface area that is in contact with the pan, the more the potatoes will brown and crisp.) Cover the skillet and cook the potatoes for a few minutes, without stirring, then give them a quick toss around the skillet, scraping up any crusty bits that have formed. Stir in the parsnips and turnips, then re-cover the skillet and continue to cook until all the potatoes are browned and crunchy at the edges and the parsnips and turnips are fork tender and slightly golden, about 10 minutes.

Step 3Add the Brussels sprouts and mushrooms to the skillet, along with the sage and mustard powder. Season to taste with salt and pepper and give the hash a quick stir. Cook, covered, an additional 5 minutes, then turn the hash in portions, scraping the crispy bits from the bottom of the pan and mixing them into the hash.

Step 4Stir the beets into the hash, cover, and cook an additional few minutes to marry the flavors. Drizzle in cream, stirring and scraping up the rest of the browned bits from the bottom of the pan as you go. Season once more with salt and pepper to taste, and serve.