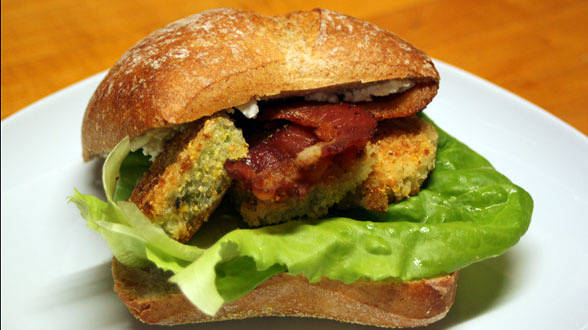 
Place the bacon on a slotted broiler pan, place the pan in the middle of the oven and bake until crisp, about 20 minutes.


In a large skillet, heat a quarter inch of EVOO over medium-high heat. Fill three shallow dishes, respectively, with the flour, egg whites and breadcrumbs mixed with the cornmeal, Pecorino-Romano cheese, garlic, onion, parsley, fennel seeds, lemon peel and pepper, to taste. Coat the tomatoes in the flour, then in the egg whites, then in the seasoned breadcrumbs. Working in batches, add the tomatoes to the hot EVOO and fry until deep golden, 2-3 minutes on each side, wiping out the pan and replenishing with EVOO between batches. Let cool on a wire rack.

Place a couple of lettuce leaves on each roll bottom and stack with three tomato slices and two criss-crossed bacon slices. Top each with about 2 tablespoons ricotta and set the roll tops in place.