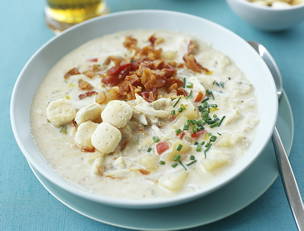 Fill a large bowl with cold water. Cut the leeks in half lengthwise and then thinly slice into half moons. Add the sliced leeks to the bowl of water, swoosh it around a little and then let them sit; the grit and dirt will fall to the bottom of the bowl.

While the leeks are sitting in the water, chop up the carrots: take peeled carrots and lay flat on cutting board. Hold each carrot at root end and use the vegetable peeler to make long, thin strips of the carrot. Chop the thin slices into small carrot bits or carrot chips, 1/2-inch wide.

Heat a medium soup pot or deep-sided skillet over medium-high heat with two turns of the pan of EVOO, about two tablespoons. Add the bacon and cook until brown and crisp, 2-3 minutes. Add the chopped celery and carrot strips. Pull the sliced leeks from the water with your hands, trying not to disturb the water too much so that the grit and dirt stays put on the bottom of the bowl. Transfer the sliced leeks to a kitchen towel to drain off some of the water then add them to the carrots and celery. Stir veggies together, add thyme springs and bay leaf and season with salt and pepper.


While the leeks cook to wilt, about 3-4 minutes, slice the potatoes: cut each potato into quarters lengthwise, lay them flat on a cutting board and thinly slice. Reserve.

Add the sliced potatoes to the veggies, and then add the stock, half-and-half, hot sauce and seafood seasoning. Bring up to a bubble and simmer for 10-15 minutes.


While the soup is simmering, run your fingers through the crab meat to remove any leftover bits of shell and cartilage. Place crabmeat in a bowl, sprinkle with the seafood seasoning and toss to coat.


Once the chowder is cooked and the potatoes are tender, add the crab to heat it through.

Remove from heat, add parsley and adjust seasonings. Serve immediately along with some crusty bread.