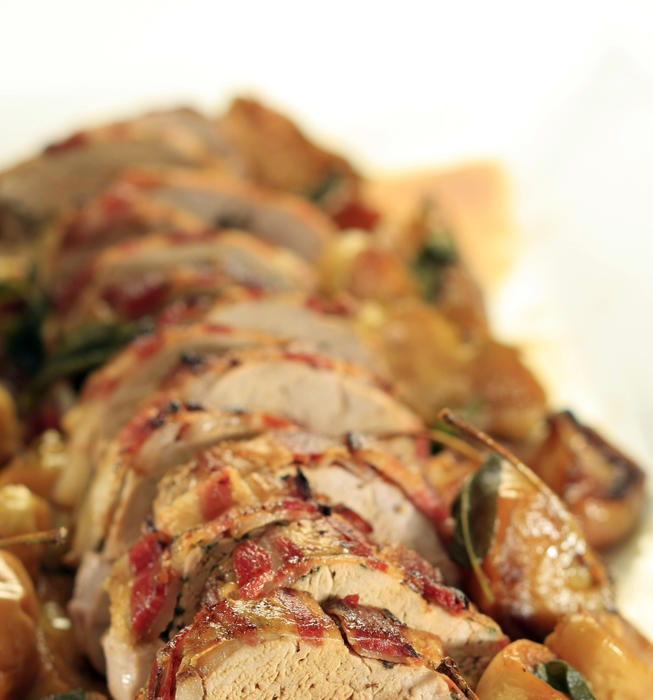 Step 1 Heat the oven to 425 degrees. In a small bowl, combine the garlic, minced sage, salt and pepper. Rub the tenderloins with the mixture, then sandwich them together so that there's a layer of herbs inside. Set aside.

Step 2 Cut 10 (12-inch) lengths of kitchen twine and lay them vertically on a cutting board, about 1 inch apart. Lay down a horizontal row of two slices of bacon end to end across the twine, overlapping the ends of the slices by about 1 inch. Lay down 4 more rows, overlapping the slices lengthwise by about one-fourth inch and making sure that the resulting rectangle of bacon is centered over the twine.

Step 3Place the herb-coated tenderloins on top of the bacon. Place 3 more horizontal rows of bacon on top of the loin, overlapping the slices as you did the ones beneath. Working from the center out, pull each string around the bacon and tie it fairly tightly at the top: It should be tight enough so that the bacon is firmly in place but not so tight that it's difficult to tie. Make sure that the bacon covers the pork. Repeat so that all the strings are tied, wrapping the overhanging lengths of bacon at each end around so that it forms a package. Trim the ends of the twine.

Step 4Place the wrapped pork in a roasting pan large enough to accommodate it and put it into the oven. Roast for 25 minutes, then turn the pork so that the top browns as well and scatter the apples and sage leaves around the pork. Roast for another 15 to 20 minutes, or until a thermometer inserted into the center of the roast registers 145 degrees (it will rise to about 150 as it rests) on a meat thermometer. Stir the apples after about 10 minutes so that they roast evenly. Remove the pan from the oven.

Step 5Remove the roast from the pan and allow it to rest on a cutting board. Place the roasting pan over a medium-high flame on the stove, using two burners if you can. With the apples and the sage still in the pan, deglaze with the wine, scraping the bottom of the pan to dislodge any browned bits. Simmer until the sauce reduces by about two-thirds and thickens slightly, about 3 minutes.

Step 6Slice the roast, using the twine to keep the bacon in place and to help portion evenly. Once the roast is cut, remove the strings. Serve immediately, with the roasted apples and the pan sauce.