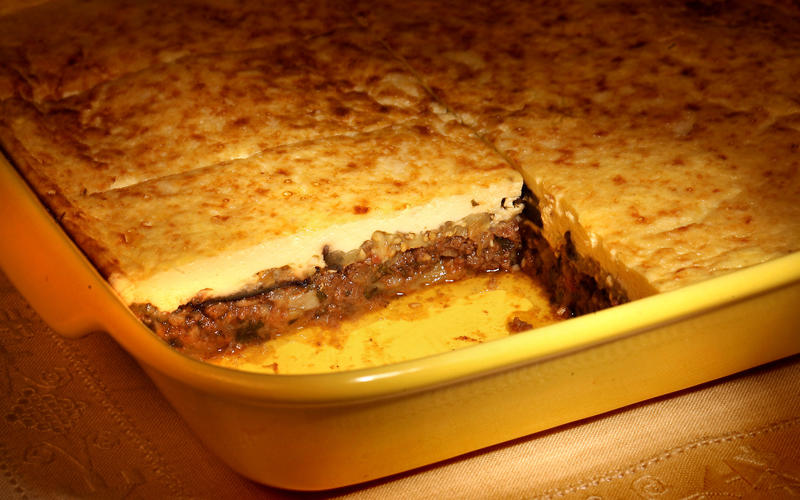 Step 1 Salt the eggplant slices generously and place them in a bowl or colander for 1 hour.

Step 2 Meanwhile, cook the lamb (or beef) in a large, nonstick skillet over medium-high heat, stirring and breaking up the meat until browned and the fat has rendered, about 5 to 10 minutes. Remove the skillet from the heat and pour off the fat. Set the meat aside in a bowl. Add a couple of tablespoons of water to the skillet and scrape up any browned bits. Add the scrapings to the meat.

Step 4Stir in the tomatoes, tomato paste, the browned meat, paprika, cinnamon, cloves, allspice, sugar, bay leaf, salt to taste, and one-half to 1 cup hot water (enough to cover the meat). Bring to a simmer, reduce heat to low, cover and simmer for 45 minutes to an hour, stirring occasionally. The mixture should be thick and fragrant. Cook, uncovered, until the liquid is almost gone, about 5 to 10 minutes more.

Step 5Remove the bay leaf, stir in pepper to taste, and remove from the heat. Taste and adjust for salt (remember, the eggplant will be salty).

Step 6Cool the mixture slightly, then stir in one beaten egg and the parsley. Heat the oven to 450 degrees.

Step 7Rinse the eggplant slices and pat dry with paper towels. Place them on baking sheets brushed with olive oil and brush the tops with the remaining 2 tablespoons olive oil. Bake for 10 to 15 minutes, until lightly browned and cooked through. Transfer to a bowl and reduce the oven to 350 degrees.

Step 8Brush a 3-quart baking or gratin dish with the remaining oil. Make an even layer of half the eggplant over the bottom, and spread on all of the meat sauce in one layer. Top with a layer of the remaining eggplant.

Step 9Bake the moussaka for 30 minutes. Meanwhile, prepare the topping. Beat the remaining 6 eggs and mix them with the yogurt. Season with three-fourths teaspoon of salt (or to taste), pepper (to taste) and a pinch of paprika. Pour over the moussaka.

Step 1 0Sprinkle the grated cheese evenly over the topping and bake for an additional 25 to 30 minutes, then place under the broiler for 1 minute or so until light golden brown on top. Watch carefully because it browns quickly. Serve warm.