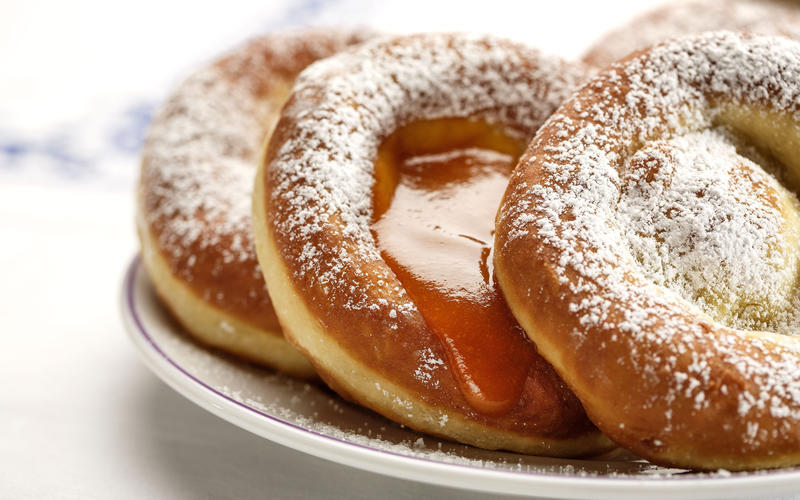 Step 2 In the bowl of a stand mixer, beat the eggs and sugar until smooth. Beat in the warm milk mixture, rum and melted butter. Slowly beat in half of the flour mixture, then beat in the salt. Beat in the remaining flour to form a smooth dough.

Step 3Remove the dough to a floured surface and knead until it is soft and somewhat silky (it's a rich dough and may not be entirely smooth), 5 to 7 minutes; the dough should be very soft, but if it is too moist, slowly knead in additional flour. Place the dough in a large, oiled bowl and lightly cover with plastic wrap. Set aside in a warm place until doubled in size, about 1 hour.

Step 4On a lightly floured surface, divide the dough into 2-ounce pieces, rolling each into a ball. Loosely cover the balls and set aside until they have puffed and almost doubled in size, about 20 minutes.

Step 5While the balls are rising, heat oil in a large pot or deep fryer to 385 degrees. Flatten the dough balls into doughnut-like shapes; however, instead of poking a hole in the center, leave a very thin film of dough in the center (it will look like a very thin indentation in the center of each piece.

Step 6Fry until golden brown on each side, 2 to 3 minutes, and then place on paper towels to soak up any excess oil. Dust with powdered sugar and serve with apricot jam.