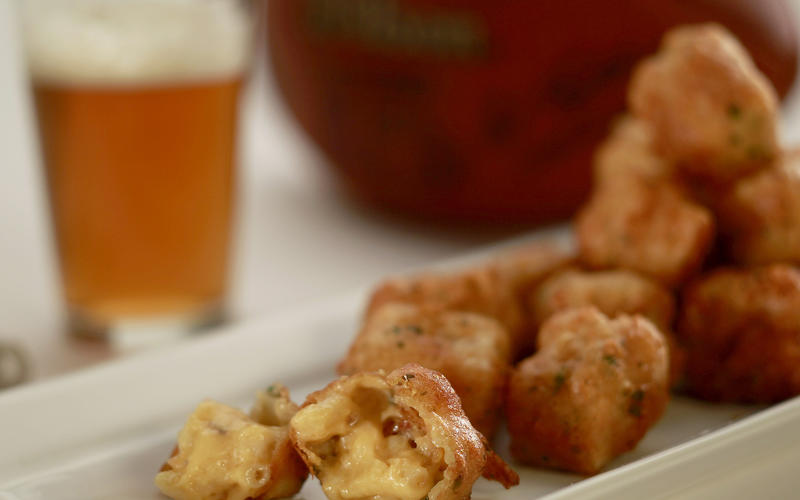 Step 2 Bring a large pot of water to the boil and add the vegetable oil, then the macaroni. Cook the macaroni according to the manufacturer's instructions to al dente, then drain. Spread the macaroni out on a rimmed baking sheet to cool slightly while you make the sauce.

Step 3In a medium, heavy pot, render the bacon until crisp, stirring frequently, 8 to 10 minutes. Using a slotted spoon, remove the bacon, leaving the fat in the pot. Drain the bacon on paper towels.

Step 4Measure the bacon fat in the pot. You will need 1/2 cup. If short, add butter as needed to have a total of 1/2 cup fat.

Step 5Heat the fat in the pot over medium heat and slowly whisk in 1/2 cup flour to create a roux. Cook the roux for 2 to 3 minutes until it is lightly colored, then begin to whisk in the half and half and 1 1/2 cups beer. Continue cooking, stirring frequently until the sauce begins to bubble and is thickened.

Step 6Stir or whisk in the grated cheeses until melted and incorporated, then stir in the bacon. Stir in the macaroni.

Step 7Spoon the macaroni and cheese into a greased 13-inch by 9-inch baking dish. Place the dish in the oven and bake until the sauce begins to bubble on the sides and the top is faintly golden, about 15 minutes. Remove and cool on a rack to room temperature, then cover and place the baking dish in the refrigerator until the macaroni and cheese chilled and completely firm, preferably overnight.

Step 8Fill a 4-quart pot with frying oil to a depth of 3 to 4 inches. Heat the oil to maintain a temperature of 350 degrees.

Step 9Make the beer batter: In a large bowl, whisk together the remaining 3 cups beer with the 3 cups flour, 1 1/4 teaspoons salt, and the baking powder. Whisk in the chives and Parmesan cheese and set aside.

Step 1 1Working with a few squares at a time, toss the bites into cornstarch to coat, then gently roll them in the beer batter to coat completely. Shake off the excess batter and carefully dip the bites into the hot oil. Fry the macaroni and cheese bites until the batter is puffed and lightly golden and the batter is crisp, about 2 minutes. Drain the bites on a rack, and continue frying. Serve the bites hot.