Beets and blood oranges with mint and orange flower water 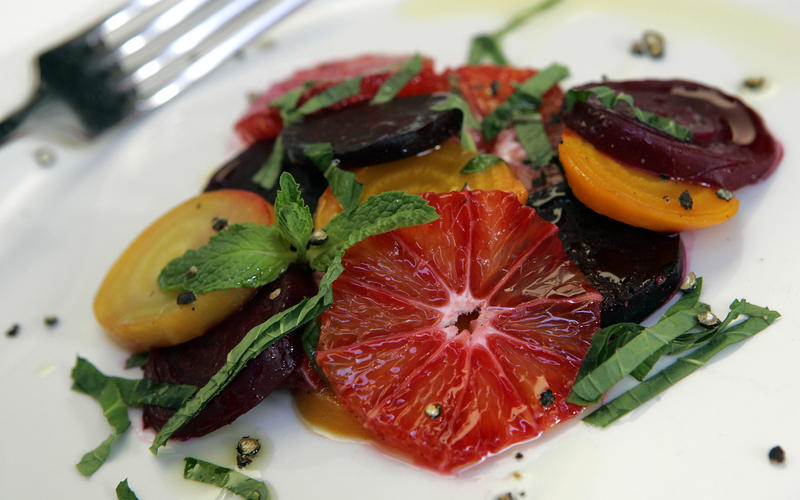 Step 1 Heat the oven to 400 degrees. Cut the greens off the beets, leaving about half an inch of the stems attached. (Save the leaves for sauteing later.) Clean the beets well, and toss them with 2 tablespoons olive oil and 1 teaspoon salt.

Step 2 Place the beets in a roasting pan with a splash of water in the bottom. Cover tightly with foil and roast about 40 minutes, until tender when pierced. (The roasting time will depend on the size and type of beet.)

Step 3When the beets are done, carefully remove the foil. Let them cool, then peel them by slipping off the skins with your fingers. Cut the beets into one-fourth inch thick slices.

Step 4Slice the stem and bottom ends from four of the blood oranges. Stand the oranges on one end and, following the contour of the fruit with your knife, remove the peel and cottony white pith. Work from top to bottom, rotating the fruit as you go. Slice the oranges thinly, into 8 to 10 pinwheels, and discard the seeds.

Step 5Juice the remaining blood orange. Combine the diced shallot, vinegar, lemon juice, one-fourth cup blood orange juice and one-half teaspoon salt in a small bowl and let sit 5 minutes. Whisk in the remaining one-half cup olive oil, and a drop or two of orange flower water (be careful, it can be overpowering; a little goes a long way). Taste for balance and seasoning. Carefully toss the beets in a bowl with half the vinaigrette and a sprinkling of salt and pepper. Taste for seasoning.

Step 6Place one-third of the beets on six chilled plates, loosely in a random pattern. Continue arranging the oranges, mint and remaining beets, layering the ingredients, letting them intertwine but not pile up on one another too much. You should have a beautiful, natural-looking mosaic effect. Spoon the rest of the vinaigrette over the salads and sprinkle a few drops of orange flower water over each one.