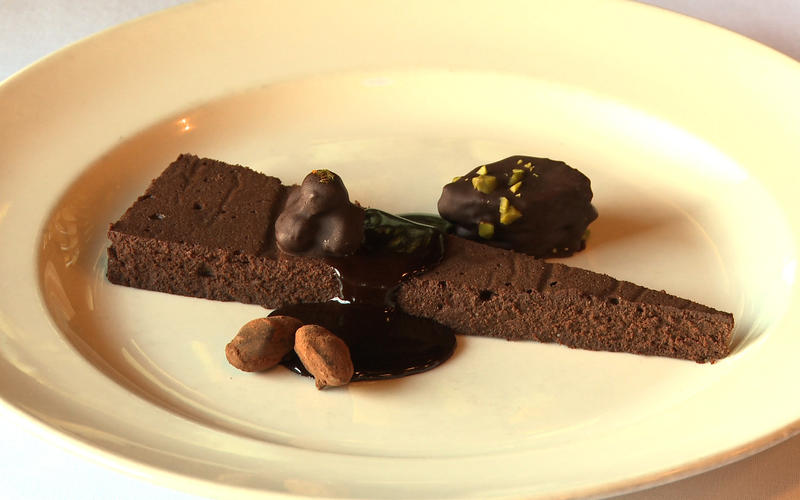 Step 2 Spray a 9-by-13-inch baking dish with nonstick cooking spray and line the bottom of the dish with a piece of parchment paper.

Step 3Whip the cream in a large mixing bowl with a wire whisk or an electric mixer on high speed until soft peaks form. Cover the bowl with plastic wrap and place it in the refrigerator until you are ready to use it.

Step 4Set a metal bowl over a pot of water or fill the bottom of a double boiler with water and bring the water to a simmer (not a boil) over medium-high heat. Remove the bowl from atop the pot and combine the chocolate, espresso and 2 tablespoons of water in the bowl. Set the bowl back over the simmering water and warm the chocolate, without stirring, until it melts, 15 to 20 minutes. Remove the bowl from atop the water and set it aside but keep the water simmering.

Step 5Combine the eggs, egg yolks and sugar in a mixing bowl (the kind used with a stand mixer). Place the bowl over the simmering water and whisk by hand until the sugar is dissolved and the mixture is slightly warm, about 5 minutes. Fit the bowl onto the stand mixer and whisk it on high speed until the mixture is light yellow, foamy and triple in volume, 5 to 7 minutes.

Step 7Spoon the batter into the prepared baking pan. Ssmooth the batter out to an even surface (using a metal offset spatula if you have one). Place the baking dish in a larger baking dish or roasting pan and fill the larger dish or pan with one-half-inch of hot tap water. Cover the larger baking dish tightly with aluminum foil, so that both dishes are covered. Pierce the foil in several places with a sharp knife and put the cake in the oven to bake for 20 minutes. Remove the cake from the oven and carefully lift off a corner of the foil to release the steam. Replace the foil and return the cake to the oven to bake for 30 more minutes, until the center of the cake is set and feels foamy, not liquidy, when you touch it gently with your finger. Remove the cake from the oven, lift the baking pan out of the water bath and place it on a wire rack to cool to room temperature. Cover the baking pan tightly with plastic wrap and place it in the refrigerator to chill for at least 2 hours or up to overnight.