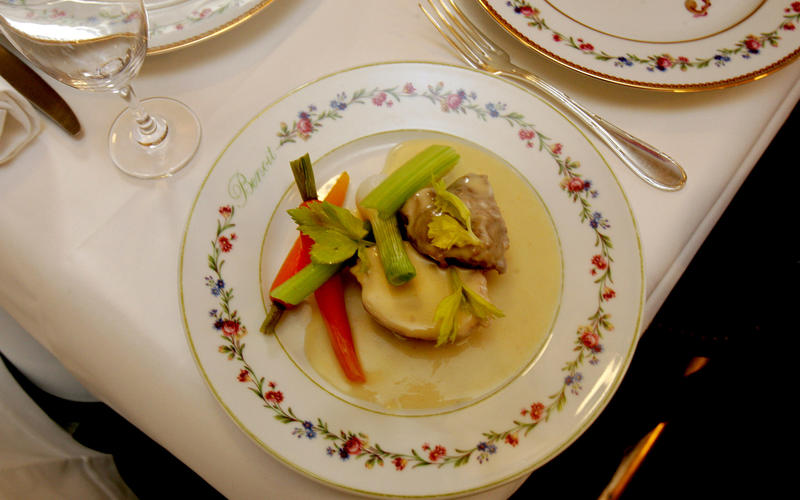 Step 1 Cut the veal into equal bite-sized pieces if the butcher has not already done so. To make a bouquet garni, use kitchen twine to tie the green part of the leek with the bay leaf and parsley into a bunch. Peel the onion and stick a clove into it.

Step 2 In a large heavy-bottomed pot, heat the oil and 4 teaspoons butter over medium heat. Add the meat and cook it on low-to-medium heat, stirring occasionally, without letting it brown. Season with salt and pepper. Sprinkle with flour, mix well with a wooden spoon and cook for 1 minute.

Step 3Barely cover with hot water and bring it slowly to a boil. Skim the surface. Add the carrot, celery, leek, bouquet garni, onion and peppercorns. Season with a pinch of salt. Cover the pot and simmer for 1 hour to 1 hour, 15 minutes until the meat is tender.

Step 4Trim the mushroom stems and rinse, but do not soak, the mushrooms. If they're large, cut them into halves or quarters. Put them into a saucepan with 1 tablespoon butter and the lemon juice. In a separate saucepan, bring to a boil enough water to cover the mushrooms. Pour the boiling water over the mushrooms, season with salt and cook for 10 minutes on medium heat. Drain them, retaining the cooking liquid. Set aside.

Step 5Put the pearl onions into a small saucepan with 2 tablespoons water; add 2 teaspoons butter and the sugar. Cover with a disk of parchment paper and cook on medium-low heat until the liquid has evaporated, about 7 minutes. Remove the parchment and stir the onions to coat them in the glaze. Set aside.

Step 6When the meat is tender, remove it from the pot and strain the cooking liquid through a fine sieve. Pour it into a saucepan and reduce it to 2 cups. Add one-half cup of the mushroom cooking liquid. In a small bowl, mix the egg yolks and the cream with a fork. Pour the liquid into the pot, beating constantly with a whisk, and bring it just to a boil. Adjust the seasoning.

Step 7Add the meat to the sauce and reheat for a few minutes on low heat. Add the mushrooms and pearl onions. Serve immediately with boiled potatoes.