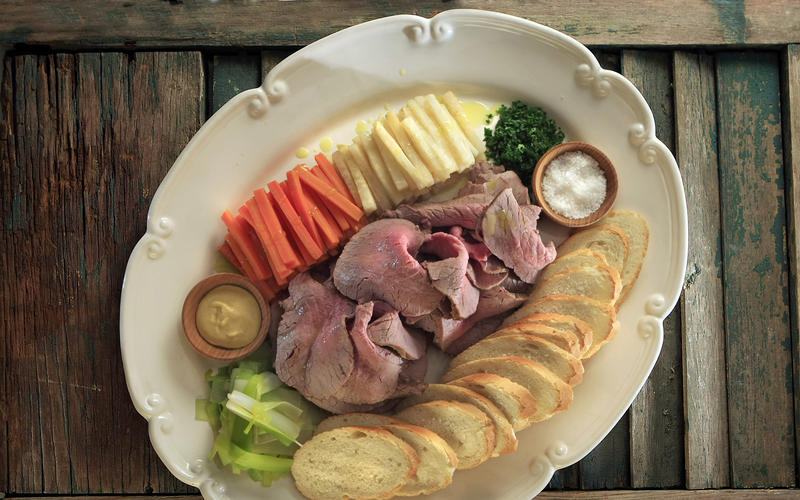 Step 1 Using a length of kitchen twine, tightly wrap the roast, tying it four times around lengthwise and once around widthwise and leaving two long ends loose on either side. Holding the ends together, suspend the roast inside the pot, measuring so that the roast is about one inch from the bottom of the pot. Tie the ends in a loop around a wooden spoon long enough to bridge the top of the pot. On the outside of the pot, using a marker or a piece of tape, mark the point at which the top of the roast sits. Put the tied roast on a plate and allow it to come to room temperature.

Step 2 Meanwhile, halve the leeks lengthwise and wash them to remove all dirt. Trim the leeks, reserving the green trimmings to make the stock (place them in the pot). Trim the white parts into sticks no thicker than one-half inch wide and 2 1/2 inches long.

Step 4Stem the parsley and finely chop the leaves. Add the stems to the pot along with the onion, bay leaves, thyme, peppercorns and chiles. Cover with 6 quarts of water and place the pot over high heat. As soon as the water comes to a boil, reduce the heat to a low simmer. Simmer gently, uncovered, for 45 minutes.

Step 6After 45 minutes, strain the broth through a large strainer, discarding the vegetables and reserving the hot broth. Return the broth to the same pot, add the 2 tablespoons salt and bring to a rolling boil.

Step 7One at a time, blanch the carrots, celery root and leeks in the broth until crisp-tender. They'll each take about 2 minutes after the broth has returned to a full boil. Remove with a slotted spoon, drain and add the vegetables to the platter.

Step 8Return the broth to a simmer, adding additional water if necessary to make sure that the level of the liquid reaches the mark you made previously. Lower the roast into the liquid, then bring the broth back to a simmer. Cook the roast to desired doneness, about 25 minutes for rare (a thermometer inserted should read about 120 degrees).

Step 9Remove the roast from the liquid and rest for 10 minutes on a cutting board. Slice the roast into very thin slices. Arrange the slices on the platter, alongside the blanched vegetables, condiments and bread. If desired, drizzle a little bit of olive oil over the vegetables. Serve immediately.