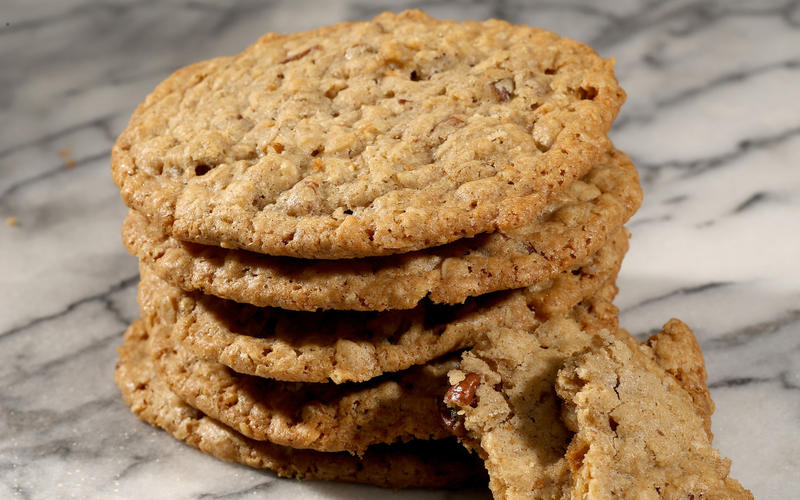 Step 1 Place the flour in a medium bowl, sift in the baking soda and cinnamon and whisk together. Whisk together the sugars in a small bowl, breaking up any lumps.

Step 2 Place the butter in the bowl of a stand mixer fitted with the paddle attachment. Turn to medium-low speed and cream the butter until it has the consistency of mayonnaise and holds a peak when the paddle is lifted. Add the sugars and mix until fluffy, 3 to 4 minutes. Scrape down the sides and bottom of the bowl. Scrape the seeds from the vanilla bean, add them to the butter mixture and mix on low speed to distribute the seeds evenly, stopping to break up any larger pieces.

Step 3Add the eggs and mix on low speed until just combined, 15 to 30 seconds. Scrape down the bowl again. The mixture may look broken, but that is fine (overwhipping the eggs could cause the cookies to expand too much during baking and then deflate).

Step 4Add the flour mixture in two additions, mixing on low speed after each addition until just combined, 15 to 30 seconds. Scrape the bottom of the bowl to incorporate any dry ingredients that have settled there. Add the oats and mix just to combine, then add the pecans (these may need to be mixed in by hand as the dough will be thick). Refrigerate the dough for 30 minutes.

Step 5Position the racks in the upper and lower thirds of the oven and heat the oven to 325 degrees. Line two cookie sheets with silicone mats or parchment paper.

Step 6Divide the dough into 6 equal portions, about 145 grams each (see note below for baking smaller cookies). Roll each one into a ball between the palms of your hands. The cookies will spread while baking and are very large; bake only 3 on each pan. Bring the dough to room temperature before baking.

Step 8The cookies are best the day they are baked, but they can be stored in a covered container for up to 3 days.