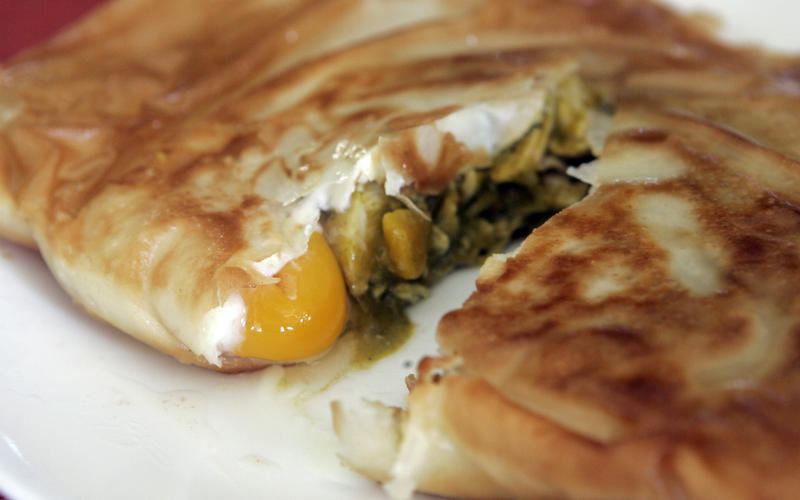 Step 1 If the filo is frozen, remove the package from the freezer half an hour before using so it can thaw. Pour three-fourths inch of olive oil into a large frying pan. Heat the oil over medium heat until a haze appears above the pan.

Step 2 Carefully unfold the filo and remove two sheets; cover the remainder with a towel. Fold the two sheets in half (so that the short ends meet each other) and set half of the resulting oblong piece over a small soup bowl. Spoon about 3 tablespoons of meat onto the portion of the filo in the bowl, then add 2 teaspoons chermoula and break a whole egg over the filling, being careful not to break the yolk. Season to taste with salt, if desired.

Step 3Immediately fold the rest of the filo over the portion in the soup bowl and lift the whole square packet by the corners. Carefully place it in the hot oil (it should be about 375 degrees) and immediately press down all the edges with the tip of a spatula so that they seal. Spoon hot oil over the top. The filo will begin to puff up.

Step 4Fry until the bottom of the brik is golden brown. Using two spatulas, carefully turn the brik over to fry on the other side. When the other side is done, remove to paper towels to drain. Repeat using the remaining ingredients. Serve hot.