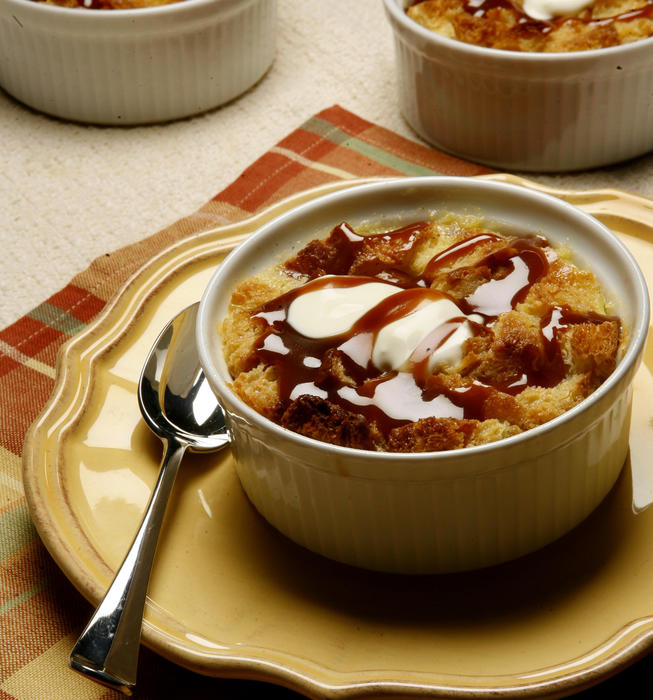 Step 1 Heat the oven to 375 degrees. Arrange the quince in a single layer in a 9-by-13-inch baking dish. Drizzle the 3 tablespoons of melted butter over the quince, then sprinkle them with brown sugar. Bake the quince until tender, 45 minutes to 1 hour. Cool the quince, then cut them in a small dice. Lower the oven temperature to 350 degrees.

Step 3With a whisk, beat the egg yolks and one-half cup sugar until blended. Stir in a little of the milk mixture to temper the yolks, then add the yolks to the saucepan. Heat and stir over medium-low heat until slightly thickened, 8 to 9 minutes. Strain; set aside.

Step 4In a heavy 9-inch skillet, melt one-fourth cup butter over medium heat. Continue to cook, whisking the butter until it turns nut brown, about 4 to 5 minutes. Toss the bread with the brown butter and toast in a 350-degree oven, about 12 to 15 minutes.

Step 5Spoon about one-fourth cup of toasted bread cubes into each of eight ramekins. Divide the quince among the ramekins, then add the remaining bread cubes. Pour the milk mixture over the bread in the ramekins pressing to coat the bread. Bake in a water bath (a deep pan filled with enough water to reach halfway up the ramekins) for about 30 minutes until the custard is set. Remove the ramekins from the water bath; cool on a rack.

Step 6While the bread pudding is baking prepare the butterscotch sauce. Combine 1 cup sugar and one-third cup water in a deep saucepan. Stir over medium heat until the sugar is dissolved. Turn the heat to high and bring the syrup to boiling without stirring. Dip a small brush in water and brush down the sides of the pan to prevent crystals from forming. Continue to cook, gently swirling the pan for even caramelization, until the syrup reaches a deep amber color, 3 to 4 minutes.

Step 7Cut up 2 tablespoons of butter and heat it with the cream in a small saucepan until it is melted. Remove from heat and stir the hot cream into the caramel until blended. It will bubble up. Stir in the vanilla and a pinch of salt.

Step 8Serve the bread pudding with a dollop of creme fraiche and drizzle with about a tablespoon of butterscotch sauce.