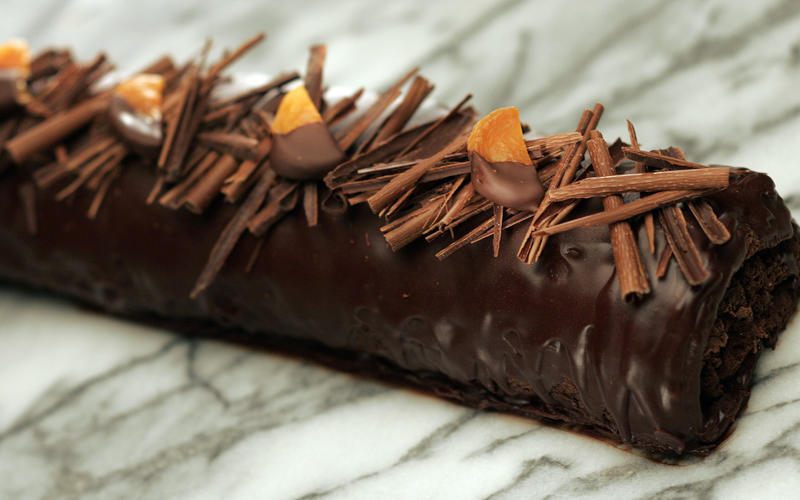 Step 1 Line a half-sheet pan (12 1/2 by 18 inches) with parchment paper extending over the short edges several inches to aid in removal of the cake. Heat the oven to 350 degrees. Melt the chocolate in a metal bowl placed over a pot of simmering water. Remove the pot from the heat, but leave the metal bowl on top of the pot to stay warm.

Step 2 Sift the powdered sugar and cocoa powder together.

Step 3In the bowl of an electric mixer, cream the butter with the powdered sugar mixture, scraping down the sides of the bowl. On low speed, add the eggs and yolks one at a time. Add the lukewarm chocolate to the mixture. (Be sure the chocolate is lukewarm; it should not be warm enough to melt the butter.) Remove the bowl from the mixer and place on a towel to keep warm.

Step 4In another large bowl of an electric mixer, add the egg whites and vinegar. With the whisk attachment, whip the egg whites while adding the sugar in 3 stages, the beginning, the middle and almost to the end, until stiff.

Step 5Place the chocolate mixture in another large bowl with a wide rim. Add one-fourth of the egg whites and gently fold in to combine. Then gently fold in the remaining egg whites. Spread the batter into the prepared pan and bake for 23 to 25 minutes, until a toothpick inserted in the middle comes out clean and the cake feels springy in the center. Cool completely on a rack.

Step 6Use an offset spatula to slide around the edges of the cake pan and under the parchment paper to release it from the pan. The top layer of the cake will crack as the cake deflates and cools. Remove the cake from the pan and spread an even layer of apricot marmalade over the cracked surface.

Step 7Roll the cake with the long side facing you until it forms a tight log. Use the parchment paper to help guide the roll. If the cake cracks, gently push the moist cake together. Carefully place it on a sheet tray and freeze until set, 2 to 4 hours.