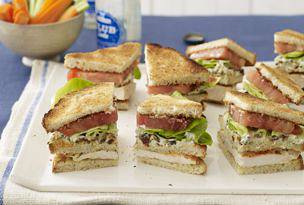 
Arrange the bacon on a broiler pan and bake until crisp, 15-18 minutes.


While the bacon is cooking, in a small bowl, combine the crème fraîche, blue cheese crumbles, garlic, mustard, parsley and chives.


In a large skillet, heat the EVOO, one turn of the pan, over medium-high heat. Season the turkey cutlets with salt and pepper, add to the skillet and cook until golden, about 4 minutes on each side. Scoot the cutlets to the side of the pan, add the butter and heat until melted. Stir in the hot sauce and coat the cutlets; turn off the heat.


Layer each of four toast slices with a sauced turkey cutlet, another toast slice, a mound of the blue cheese spread, two criss-crossed slices of bacon, two lettuce leaves, one tomato slice, a sprinkling of salt and pepper and a third toast slice. Serve the clubs with the carrot and celery sticks.