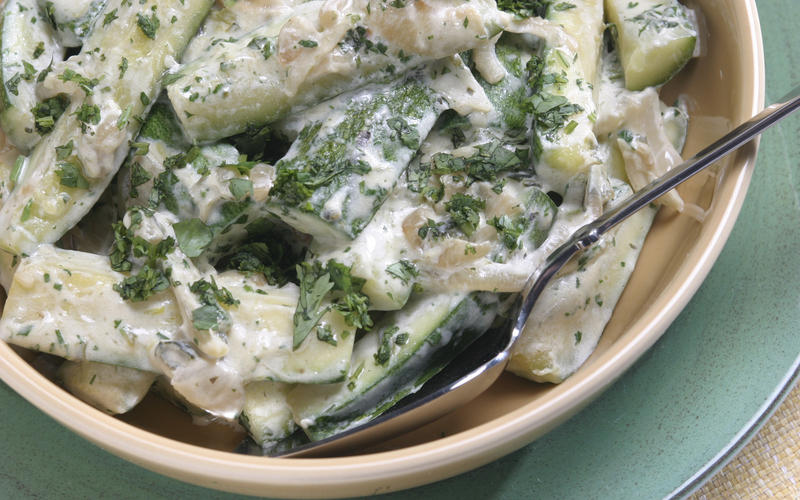 Step 1 Cut the onion in half and then cut it into one-fourth-inch crosswise slices. Place it in a heavy-bottomed skillet with the oil and a sprinkling of salt. Cover tightly and cook over very low heat until the onion has thoroughly wilted and begun to turn golden, about 30 minutes.

Step 2 In the meantime, cut the ends from each zucchini, slice in lengthwise quarters and then cut the quarters in half crosswise. Roast the poblano chile under a broiler or on a grill until the skin is blackened and blistered, about 10 to 15 minutes. Set aside to cool, and then peel. Discard the core and seeds, and tear the flesh into shreds.

Step 3When the onions have turned golden, add the sliced garlic and cook 5 minutes more. Add the poblano and the zucchini and stir to combine well. Season with three-fourths teaspoon salt. Cover and continue to cook over low heat until the squash has begun to soften, but is still crisp at the center, about 20 minutes.

Step 4When the zucchini is ready, pour the crema over the top and raise the heat to medium-high. Cook, uncovered, stirring occasionally, until the cream has thickened, about 7 to 10 minutes. If the cream begins to brown and stick on the bottom of the pan, scrape it free with a spatula; it will dissolve and enrich the sauce.

Step 5Just before serving, taste and adjust the seasoning and stir in all but 2 tablespoons of the cilantro. Spoon into a serving bowl and sprinkle with the remaining cilantro. Serve immediately.