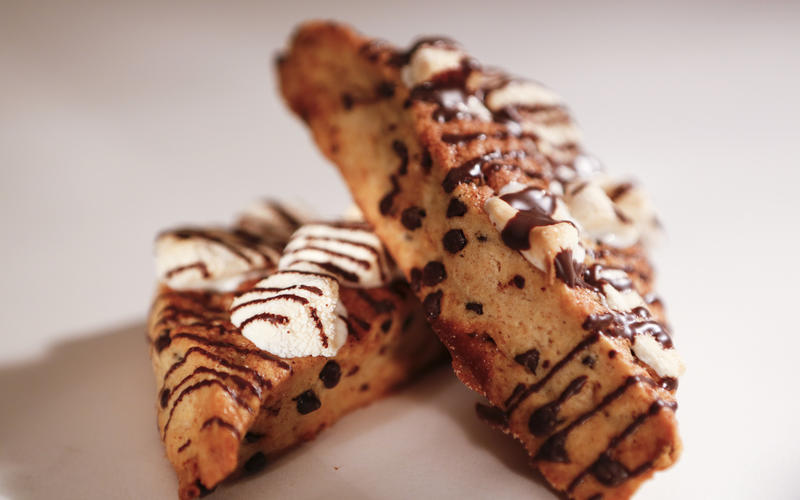 Step 1 In the bowl of a stand mixer fitted with a paddle attachment, or in a large bowl using an electric mixer, beat together the all-purpose and wheat flours, cinnamon, sugar and salt. Add the cold butter and mix at the lowest speed until the butter is reduced to the size of peas.

Step 2 Combine the honey and 1½ cups heavy cream and, with the mixer on low speed, slowly pour into the flour and butter mixture. Mix until just blended. The dough will look lumpy, and there should still be bits of butter visible in the dough. Combine the chocolate chips and marshmallows, add to the dough, and mix on low speed just until incorporated.

Step 3Place the dough onto a well-floured surface and knead it into a ball. Flour your hands and a rolling pin, and roll the dough three-fourths-inch thick. You should see small bits of butter in the dough. Flour a 3-inch round plain or fluted cutter and cut circles of dough. Place the scones on a baking pan lined with parchment paper. Collect the scraps neatly, roll them out, and cut more circles. Freeze the dough overnight after they're cut; the scones can be prepared up to this point and frozen for up to 2 weeks before baking (wrap the scones well if freezing for an extended period of time to prevent freezer burn).

Step 4Heat the oven to 375 degrees. Brush the frozen scones with the remaining cream and sprinkle with cinnamon sugar. Bake until puffed and set and the tops are a rich golden brown, 25 to 35 minutes. If adding extra marshmallows to the top, sprinkle them over the scones halfway to two-thirds of the way as they bake so the marshmallows brown slightly (the extra marshmallows may deflate a bit once they come out of the oven).

Step 5Cool the scones on a rack before serving.