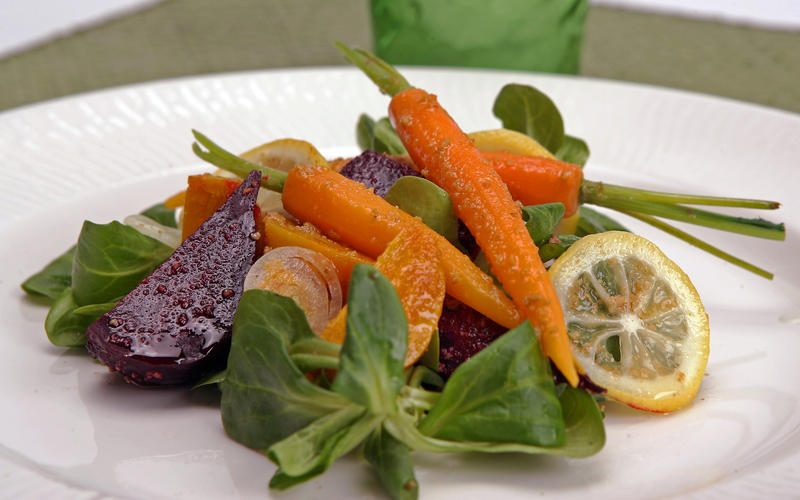 Step 1 Heat the oven to 400 degrees. Place the beets in a shallow baking pan, with one-fourth cup water. Sprinkle one-fourth teaspoon salt and 2 tablespoons olive oil over the beets. Cover the pan with foil and roast in the oven for about 1 1/2 hours, until a knife easily pierces the beets. Cool to room temperature, peel and quarter, keeping the gold and red beets separate.

Step 2 Meanwhile, make the dressing: Use a mortar and pestle to grind the cumin seeds to a powder. Add the garlic and pound to a paste. Add a pinch of salt, the cayenne and the juice of one lemon. When all the ingredients are incorporated and the salt is dissolved, drizzle in one-fourth cup of olive oil while stirring. Adjust to taste. Makes about one-fourth cup vinaigrette.

Step 3In a small pot of boiling salted water, blanch the lemon slices for 20 seconds, just to remove the tartness. Lift out with a slotted spoon and cool in ice water. Drain and set aside in a large bowl.

Step 4In the same pot of boiling water, add the carrots and blanch 2 to 3 minutes, to bring out the vibrant color and soften just slightly. Remove and set aside to cool (do not shock in an ice bath). Add them to the bowl with the lemons.

Step 5Toss the gold beets into the bowl with the lemon and carrots, keeping the red beets separate. To the bowl, add the lemon, parsley, mache, shallot and the remaining squeeze of lemon juice, tossing to combine. Add 2 teaspoons vinaigrette, or enough to lightly coat, and toss gently. Season to taste and divide among two plates. Separately, toss the red beets with enough vinaigrette to coat, then divide the beets among the two plated salads. Serve immediately.