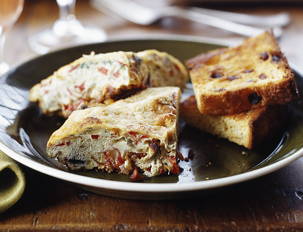 
In a small, ovenproof nonstick skillet, heat the EVOO, three turns of the pan, over medium heat. Add the eggplant, onion and garlic, season with salt and pepper and cook until the eggplant softens, 7 minutes. Add the tomatoes, olives, roasted pepper and chili pepper; toss to heat through. Sprinkle the parsley and basil, if using, on top.


In a small bowl, beat the eggs with salt and pepper. Pour the eggs over the vegetables and cook until firm around the edges. Top the frittata with the cheese and bake in the oven until golden and puffy, 10 minutes.


Spread the butter on both sides of the panettone. Heat a griddle pan or second skillet over medium heat. Toast the bread, turning once, until dark golden on both sides. Drizzle the honey on top.