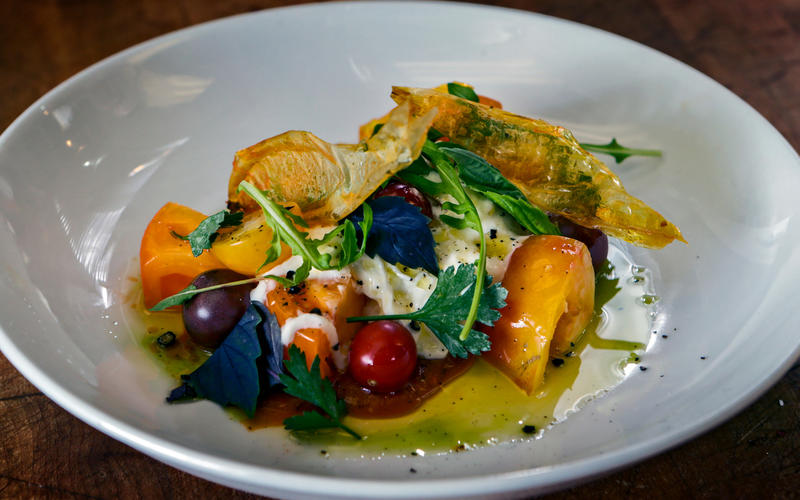 Step 1 Heat the oven to 425 degrees. Place the tomatoes on a rimmed baking sheet lined with foil (halve the tomatoes if desired), drizzle over a little olive oil and season lightly with salt and pepper. Roast the tomatoes until softened and just beginning to caramelize, about 30 minutes. Remove and set aside until cool enough to handle, then slip the skins off of the tomatoes. Cover and refrigerate, then reheat the roasted tomatoes until ready to serve.

Step 2 Meanwhile, dehydrate the skins at the lowest possible setting until crisp, at least a few hours and up to overnight.

Step 3To assemble the salad, place the burrata in the center of a serving platter, slitting the thin skin of the cheese to open. Quarter the roasted tomatoes and arrange the pieces around the cheese, then arrange the cherry tomatoes.

Step 4Liberally drizzle olive oil over the burrata and tomatoes, and season with salt and pepper. Sprinkle the basil and mint leaves over the salad and garnish with the crisp tomato skins. Serve immediately.