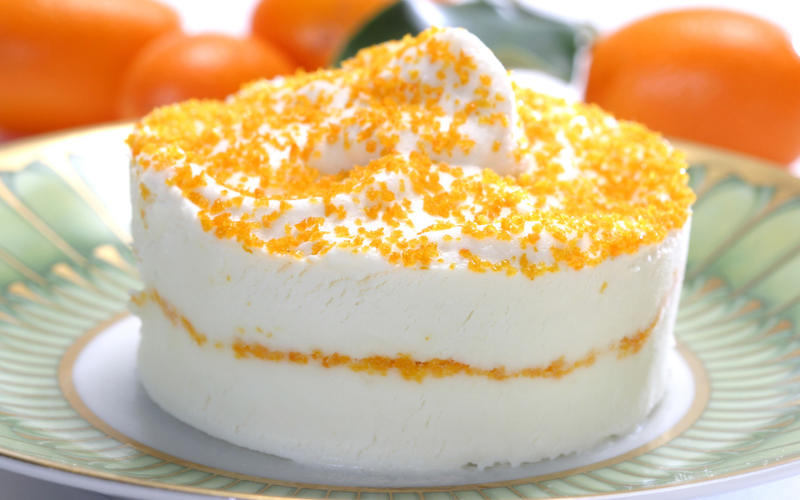 Step 1 The day before you plan to make the semifreddo, zest the kumquats using a box grater or microplane. Spread the zest on a parchment-lined baking pan and allow to dry overnight.

Step 2 Finely chop the dried zest or pulse in a spice grinder until it has a fine, sand-like consistency. Set aside.

Step 3Cut the cherimoya into quarters, then peel each quarter. Cut the flesh into pieces and remove the seeds. Place the seeded pieces in a blender and puree. It is easy to miss a few seeds, so check the blender and remove any additional seeds that have appeared. This will yield about 1 1/4 cups puree. Refrigerate the puree while you are preparing the remaining ingredients.

Step 4In a chilled bowl, whip the cream until it forms soft peaks. Whip in the powdered sugar. Cover and set aside in the refrigerator.

Step 5For an Italian meringue, prepare a syrup by combining one-fourth cup water, 2 tablespoons of the sugar and the corn syrup in a small heavy saucepan. Heat over medium heat to simmering. Cook the syrup until it reaches the soft-ball stage (234 to 240 degrees), about 12 minutes.

Step 6While the syrup is cooking, beat the egg whites with the cream of tartar until soft peaks form. Gradually beat in the remaining 1 tablespoon of sugar until stiff peaks form.

Step 7When the syrup reaches the right temperature, pour it into the meringue in a thin stream, beating constantly, until all the syrup has been incorporated.

Step 8Fold the chilled cherimoya puree into the reserved whipped cream. When the puree and cream are combined, add the meringue, folding gently to combine.

Step 9Spoon the mixture into 8 (6-ounce) custard cups, filling each half full. Sprinkle about one-fourth teaspoon kumquat zest over each. Divide the remaining cream among the cups and sprinkle an additional one-fourth teaspoon kumquat zest over each. Freeze 2 hours or longer before serving. Cover each cup with plastic wrap if freezing them longer than two hours.

Step 1 0To serve, run a knife around each cup to gently loosen the semifreddo, and unmold each onto a chilled plate.