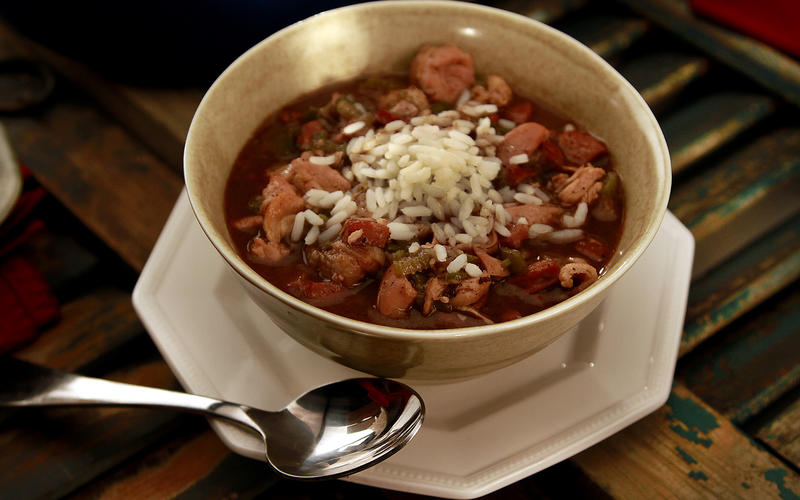 Step 1 Remove excess fat from the chicken pieces. Sprinkle 1 teaspoon salt and one-half teaspoon each garlic powder and ground red pepper over the chicken, rubbing the seasoning over both sides of each piece. Set aside at room temperature for 30 minutes.

Step 2 Meanwhile, combine the onions, bell peppers and celery in a bowl.

Step 3Combine the flour, remaining one-half teaspoon each salt, garlic powder and ground red pepper in a paper or plastic bag. Add the chicken pieces and shake until the chicken is well-coated. Reserve one-half cup of the flour mixture.

Step 4In a large, heavy skillet, heat 1 1/2 inches of oil until very hot (375 to 400 degrees). Fry the chicken until the crust is brown on both sides and the meat is cooked, about 5 to 8 minutes per side; drain on paper towels. Carefully pour the oil into a glass measuring cup, leaving as many of the browned particles in the pan as possible. Scrape the pan bottom with a metal whisk to loosen any stuck bits, then return one-half cup hot oil to the pan (discard the remaining, or strain and save for another use).

Step 5Place the pan over high heat. Using a long-handled metal whisk, gradually stir in the reserved flour. Cook, whisking constantly, until the roux is a dark red-brown to black, about 3 1/2 to 4 minutes, careful not to let it scorch or splash on your skin. Remove from heat and immediately add the vegetables, stirring constantly until the roux stops darkening. Return the pan to low heat and cook until the vegetables are soft, about 5 minutes, stirring constantly and scraping the pan bottom well.

Step 6Meanwhile, place the broth in a 5 1/2-quart saucepan or large Dutch oven, and bring to a boil. Add the roux by the spoonful to the boiling broth, stirring until dissolved between each addition. Return to a boil, stirring and scraping the pan bottom often. Reduce the heat to a simmer and stir in the andouille and minced garlic. Simmer, uncovered, for about 45 minutes, stirring often toward the end of the cooking time.

Step 7While the gumbo is simmering, bone the cooked chicken and cut the meat into one-half-inch dice. When the gumbo is cooked, stir in the chicken and adjust the seasoning as desired. Serve immediately. (To serve, mound one-third cup of cooked rice in the center of a soup bowl and ladle about 1 1/4 cups gumbo around the rice.)