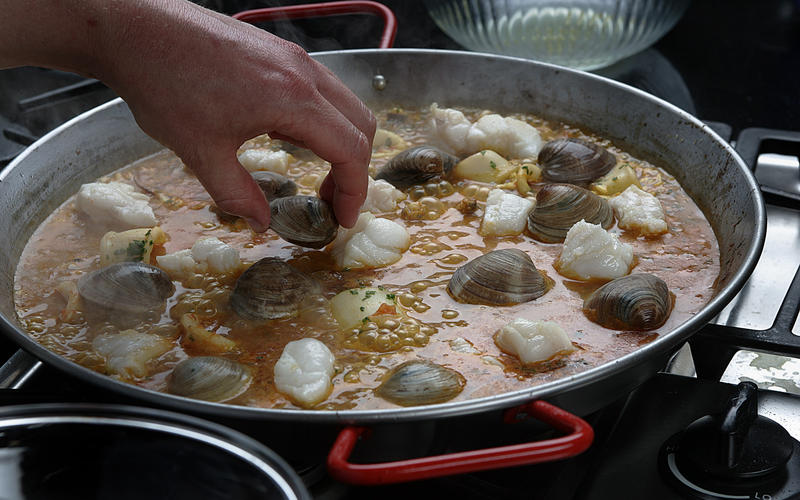 Step 1 Heat the oven to 425 degrees. Place the diluted clam juice in a medium saucepan and bring to a simmer over medium heat. Add the saffron and keep the stock at a slow simmer until ready to use.

Step 2 Place 3 tablespoons of the oil in a 15- or 16-inch paella pan set over a single burner and heat on medium heat until it starts to smoke. Add the monkfish and cook until barely seared, 1 to 2 minutes, seasoning it lightly with salt. Using a slotted spoon, transfer the fish to a bowl and set aside. Add the squid to the pan, stirring, until just seared, about 2 minutes, seasoning it with salt.

Step 4Add the rice to the paella pan and stir it gently to coat with the pan mixture. Pour in 3 1/2 cups of the simmering stock, keeping the remaining stock simmering in case it is needed later. Set the paella pan over two burners, stir in the parsley and a sprinkling of salt, and shake the pan gently to distribute the rice evenly. Cook over medium heat for 5 minutes. Periodically move and rotate the pan so that the liquid boils evenly.

Step 5Press the clams and the monkfish into the top of the rice and cook unti the cooking liquid is almost level with the rice but the rice is still rather soupy, another 2 to 3 minutes. If the liquid is absorbed too fast and the rice still seems too raw, sprinkle on some more stock.

Step 6Transfer the paella pan to the oven and bake until the clams open and the rice is tender but still a little al dente, about 15 minutes. Check the paella a few times and sprinkle more stock over the rice if it seems too al dente. Remove the paella from the oven and discard any clams that have not opened. Cover the pan with aluminum foil, and let stand for 5 minutes. Uncover the pan and let stand for another 5 minutes (the rice gets better as it stands).

Step 7While the rice is standing, heat the remaining 1 tablespoon olive oil in a large skillet or wok over high heat. Stir-fry the shrimp, a few at a time, adding some of the minced garlic to each batch, until the shrimp are bright pink and just cooked through, 2 to 3 minutes per batch. Transfer the shrimp to a bowl and keep warm.

Step 8To serve, arrange the lemon wedges around the edge of the paella pan and decorate the top with the shrimp. Serve the paella straight from the pan, along with allioli, for stirring into the rice.