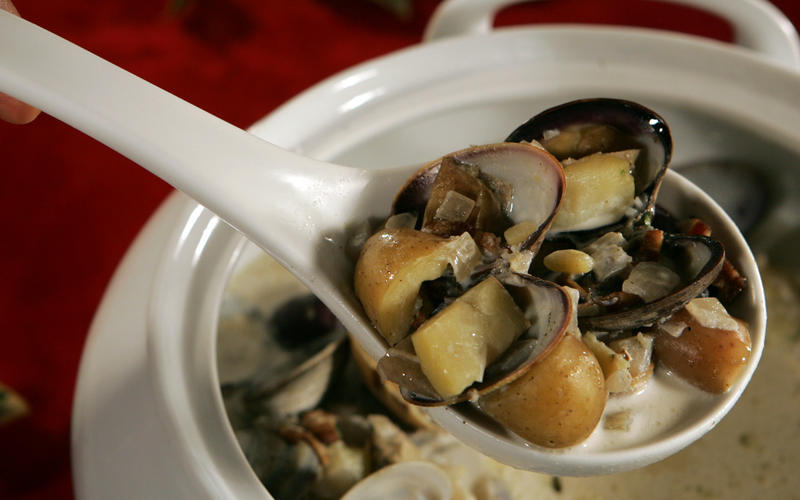 Step 1 Cut the potatoes into bite-size pieces and put them in a medium soup pot. Add enough water to cover generously, season with one-half teaspoon salt and bring to a boil. Reduce the heat to a simmer and cook until the potatoes are tender, about 15 minutes.

Step 2 Remove the potatoes from the cooking water with a slotted spoon and set them aside in a bowl. Don't worry about little pieces that break off in the water; they'll help thicken the chowder. Return the cooking water to high heat and reduce by half.

Step 3Cook the bacon and the butter in a large skillet over medium heat until the bacon renders its fat and begins to brown, about 8 to 10 minutes. Discard all but about 2 tablespoons of the fat and add the celery, onion and thyme. Cook until the vegetables are tender, about 5 minutes.

Step 4Add the white wine and cook to burn off the alcohol, 2 to 3 minutes. Add the clams, cover tightly and increase the heat to high. Cook until the clams have opened, about 3 minutes. If there are some clams that are still closed tight, cook for 1 to 2 minutes more. After that, discard any that don't open.

Step 5Add the clams, their juices and the potatoes to the soup pot with the potato cooking water. (The recipe can be made to this point up to 1 day in advance and refrigerated tightly covered.)

Step 6Add the half-and-half and cream to the clams and potatoes and cook over medium-low heat until the mixture is warmed through, about 5 minutes. Cook just until a skin forms on the surface of the cream. Do not overcook or the cream will separate. Season to taste with salt and freshly ground pepper, and ladle into heated soup bowls. Combine the parsley, lemon zest and chives in a small bowl and sprinkle a little of the mixture over each serving.