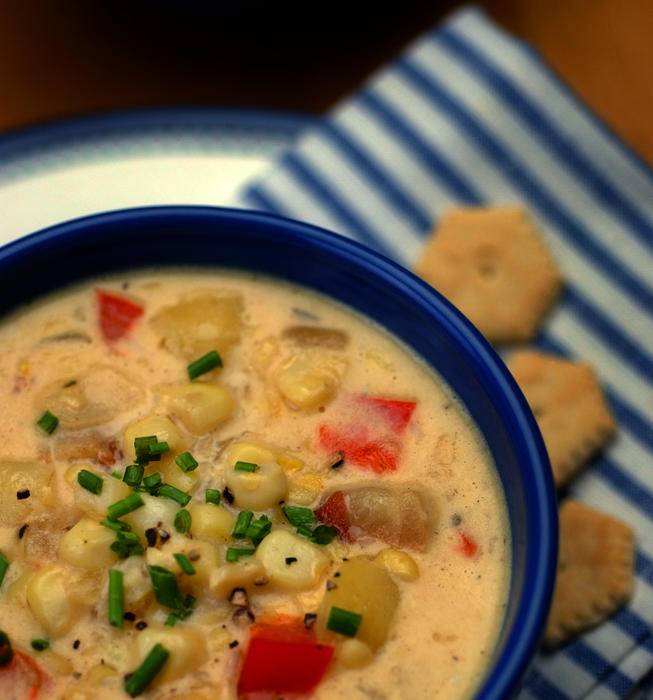 Step 1 Husk the corn. Carefully remove most of the silk by hand and then rub the ears with a towel to finish the job. Cut the kernels from the cobs and place in a bowl. You should have about 2 cups. Using the back of your knife, scrape down the cobs and add the milky substance that oozes out of the corn kernels.

Step 2 Heat a 3- to 4-quart heavy pot over low heat and add the diced bacon. Once it has rendered a few tablespoons of fat, increase the heat to medium and cook until the bacon is crisp and golden brown. Pour off all but 1 tablespoon of the bacon fat, leaving the bacon in the pot.

Step 3Add the butter, onion, bell pepper, thyme, cumin and turmeric. Saute, stirring occasionally with a wooden spoon, for about 8 minutes, until the onion and pepper are tender but not browned.

Step 5Stir the cornstarch mixture and slowly pour it into the pot, stirring constantly. As soon as the chowder has come back to a boil and thickened slightly, remove from the heat and stir in the cream. Adjust the seasoning if necessary. If you are not serving the chowder within the hour, let it cool a bit, then refrigerate; cover the chowder after it has chilled completely. Otherwise, let it sit at room temperature for up to an hour, allowing the flavors to meld.

Step 6When ready to serve, reheat the chowder over low heat; don't let it boil. Ladle into cups or bowls and sprinkle with the chopped chives.