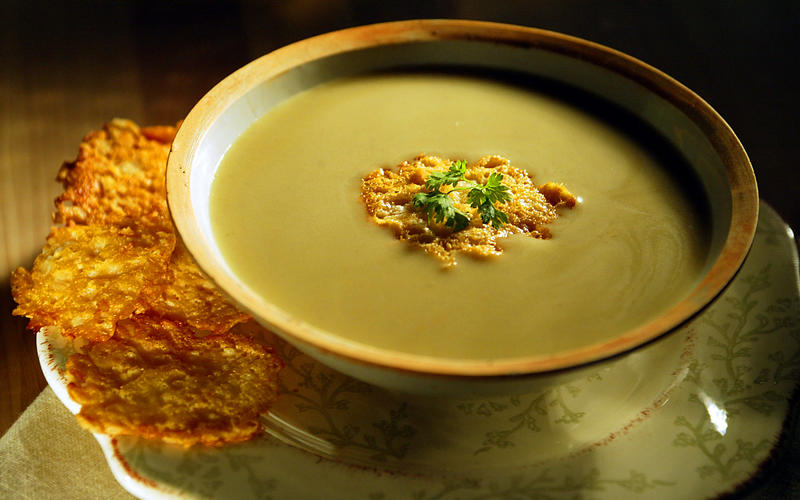 Step 1 Pare the artichokes as described. Cut into quarters and keep in a bowl of lemon water until ready to use.

Step 2 Cook the onion and the olive oil in a large saucepan over medium heat until the onion begins to soften, about 5 minutes. Add the carrot, reduce the heat to medium-low, cover and continue cooking until the carrot has softened, another 5 to 10 minutes, being careful not to let the vegetables brown.

Step 3Add the garlic and the potato and cook another 5 minutes. While the vegetables are cooking, chop the artichoke quarters into 1/2-inch pieces and add them to the saucepan. Add the salt and cook, covered, 10 minutes to begin marrying the flavors.

Step 4Add the broth and bring the mixture to a simmer over medium-high heat. Reduce the heat to medium-low and cook until the vegetables are soft enough that you can smash them between your fingers, 25 to 30 minutes.

Step 5Transfer the soup mixture into a large mixing bowl and wipe the saucepan clean. Puree the soup in a blender on high speed until light and smooth, about 30 seconds. Do this in 3 additions to keep from overflowing the blender. As each batch is pureed, pour it through a fine strainer into the saucepan. Stir the soup that's in the strainer to help it pass through. Return the saucepan to medium-low heat.

Step 6In a bowl, stir together the whipping cream and the egg yolks until smooth. When the puree has neared a simmer, spoon 1/2 cup of it into the cream/egg mixture and whisk until smooth. This "tempers" the egg yolks, cooking them slightly, so they won't curdle when added back to the saucepan.

Step 7Slowly whisk the cream/egg mixture back into the saucepan and continue to cook, whisking frequently, until the soup has thickened slightly and the texture has become silken, about 5 minutes. Do not let the soup boil or the egg will curdle.

Step 8Ladle about 1/2 cup of hot soup into a small soup bowl and garnish with a crisp Parmesan chip or grated Parmesan in the center.