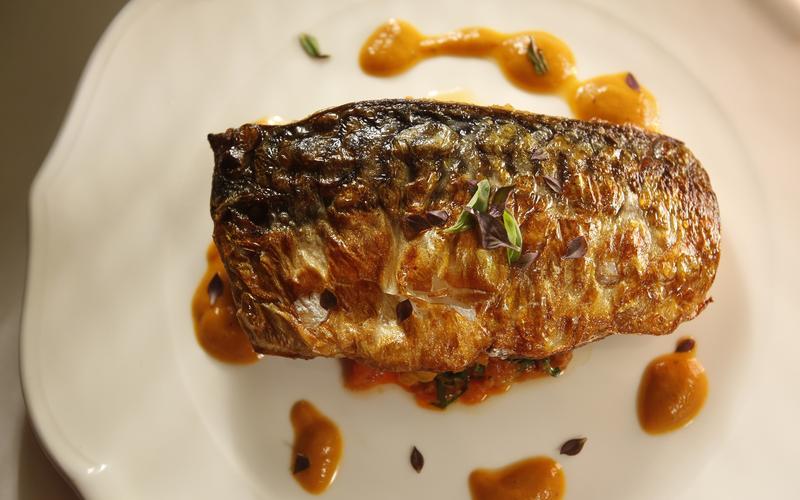 Step 1 Prepare the peppers: Place the red and yellow peppers on a rack set over a gas stove-top burner heated over high heat. Roast until the skin on all sides of each pepper is charred, about 5 minutes, turning frequently. (If you have an electric or ceramic stove top, roast the peppers in the oven using the broiler setting until charred on all sides.) Wrap each pepper in plastic wrap and set aside until the peppers are cool enough to handle, then peel the skin (the skin should stick to the plastic wrap). Rub the plastic wrap against the skin to loosen and remove it. Do not rinse the peppers to remove the skin, as rinsing will remove flavor. Stem and seed each pepper, then finely dice the peppers. Set aside.

Step 3In a large, heavy-bottomed saucepan, heat 2 tablespoons olive oil over medium heat. Add the garlic cloves and pepper scraps, then the chopped onion, chile flakes and chorizo scraps. Cook, stirring occasionally, until the chorizo begins to render fat and the vegetables have softened and become aromatic, several minutes.

Step 4Add the tomato paste, stirring vigorously to coat the vegetables with the paste. Continue to cook until the paste darkens and begins to caramelize on the base of the pan, 1 to 2 minutes. Stir in the broth and basil stems, and reduce the heat to a gentle simmer. Simmer the piperade base, loosely covered, for 30 minutes to marry the flavors.

Step 5Remove the sauce from heat and purée using an immersion or stand blender. Strain the sauce through a fine mesh sieve (more than once if needed) to make the smoothest sauce possible. Place the sauce back in the saucepan and bring to a gentle simmer. Add another 2 tablespoons olive oil and emulsify using an immersion or stand blender. Season to taste with salt. Set the piperade sauce aside in a warm place until ready to serve the dish.

Step 6To prepare the garnish, heat a straight-sided sauté pan over medium heat until hot. Add 2 tablespoons olive oil along with the finely diced chorizo, and sauté, stirring frequently, until the chorizo has rendered its fat and is crispy. Add the red and yellow peppers, coating them with the chorizo fat as they sauté. Reduce the heat and add a pinch of salt. Continue to cook for a few minutes, stirring occasionally, to marry the flavors. Add the tomatoes, gently stirring so the tomatoes retain as much of their shape as possible. Add an additional pinch of salt, along with half of the piperade sauce. Simmer, stirring occasionally, until the sauce coats th