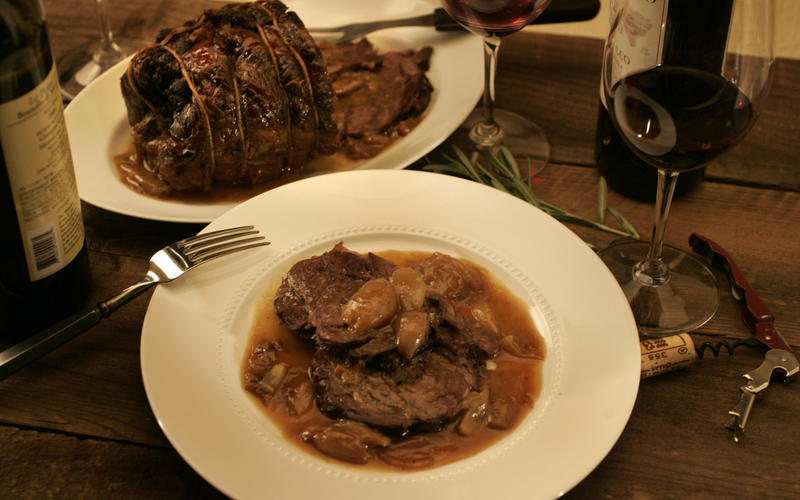 Step 1 Heat the oven to 350 degrees. Season both sides of the beef with 2 teaspoons salt and one-half teaspoon black pepper. On a cutting board, lay open the boned meat with the fat side down. Place the marrow in the center of the opened meat, along the same direction as the grain. Sprinkle one-quarter teaspoon salt, one-quarter teaspoon black pepper and the chopped rosemary over the marrow. Roll the meat tightly, enclosing the marrow, and tie the roast with butcher string.

Step 2 In a large ovenproof casserole, heat 2 tablespoons oil over medium-high heat until nearly smoking. Sear the tied beef on all sides until well-browned, about 12 minutes.

Step 3Remove the beef from the pan and set aside. Add the peeled shallots to the pan and cook over medium heat until they begin to turn golden brown, about 5 minutes. Increase the heat to high and stir in the beef stock or broth to deglaze the pan, scraping up any brown bits at the bottom of the pan.

Step 4Return the beef to the pan. Cover it and cook for 1 1/2 hours. Add the vin santo and cook for another 1 1/2 hours. Baste the roast a few times during cooking. Remove the beef and allow it to rest for 10 minutes. Cut the strings, slice across the grain and spoon the shallots and sauce over it.