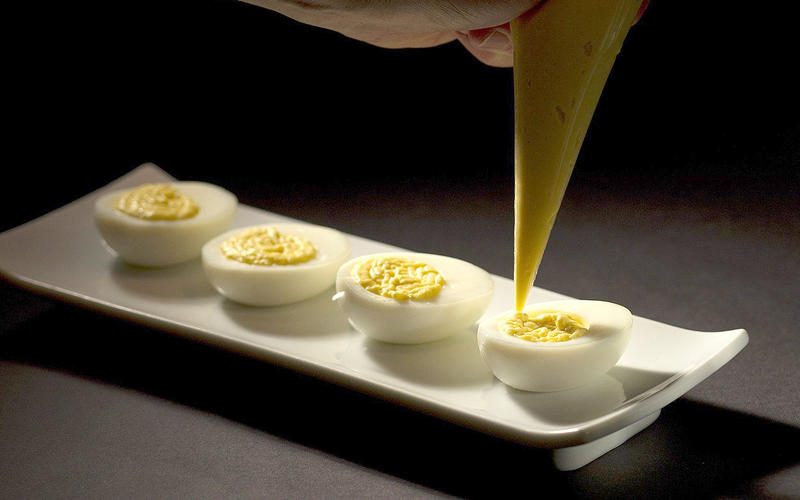 Step 1 Place the eggs in a medium-sized sauce pot and cover them with water by at least an inch. Place the pot over high heat and bring it to a boil as quickly as possible. Once the water begins to boil, set a timer for 10 minutes. Once the timer sounds, remove the pan from the heat and pour out the hot water. Run the eggs under cold water until they are cool enough to handle but still warm. Carefully peel the shell from each egg under running water. Place the eggs in ice-cold water and transfer to a refrigerator to thoroughly chill them to the center.

Step 3Combine the yolks, mustard, cayenne pepper, salt, water and lemon juice in a small blender or food processor. Blend until smooth, then slowly drizzle in the oil until it has been thoroughly incorporated and is homogenous. For added refinement, the yolk purée can be passed through a small fine-meshed strainer (chinois). Chill the yolk purée in the refrigerator, then transfer it to a disposable plastic piping bag.

Step 5Form a quenelle of caviar and place it lengthwise across the top of the egg. Use a pair of scissors to snip 1-inch "spears" from the tips of the chives. Arrange the chive tips so they lean against the quenelle of caviar, and serve immediately.