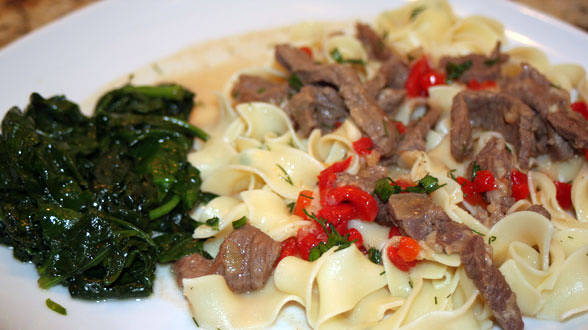 Place a large pot of salted water over high heat and bring to a boil. Once boiling, add the egg noodles and cook to al dente, with a bite to them. Drain the noodles and add back to hot pot and toss with butter and half of the dill and chives; stir to combine.

When the water for the noodles is close to coming up to a boil, place a large skillet over medium-high heat with 2 tablespoons of butter and 2 tablespoons of EVOO, about two turns of the pan. While the skillet is heating up, season the steak slices with some salt and freshly ground black pepper, then sprinkle with the flour and toss the meat around to distribute. Add the coated sliced steak to the skillet and spread out in an even layer.


Brown the meat for 2-3 minutes alone, then grate the onion and garlic over the meat and sprinkle with the smoked paprika. Give the skillet a stir and continue to cook for about 2-3 minutes. Add the drained pimentos and beef stock and stir to combine. Bring up to a bubble and simmer until lightly thickened, about 1 minute. Stir in sour cream and give the meat a taste to see if it needs any more salt and pepper.

Wilt spinach into a drizzle of EVOO over medium heat and season with salt, pepper and nutmeg, to taste.

Divide the buttered herbed noodles among four plates and top with Ghoul-ash and remaining dill and chives for garnish. Serve some wilted spinach alongside.


This is one of many “Yum-o!” recipes – it’s good and good for you. To find out more about Yum-o!, Rachael’s nonprofit organization, go to www.yum-o.org.