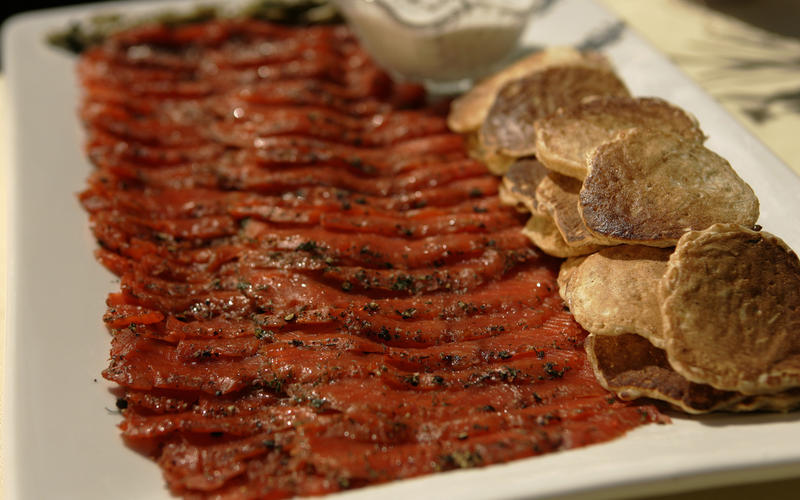 Step 1 Crush the peppercorns either with a mortar and pestle or by securing them in a thick, sealable plastic bag and hammering them with a hammer or a thick-bottomed pan. In a medium bowl, mix the salt, sugar and crushed peppercorns. Set aside.

Step 2 Cut the fennel bulb very thinly into lengthwise slices and mince the fronds. Place a small rack in the bottom of a glass baking dish big enough to accommodate the salmon fillets.

Step 4Place the second salmon fillet, skin-side up, on top of the covered first fillet, making sure that the two fillets align. Drizzle the rest of the aquavit over the top layer and tightly wrap the cheesecloth over the fillets. Cover with plastic wrap. Place a second baking dish (smaller than the first) on top of the wrapped fish and put the entire thing into the refrigerator. Weight with heavy items from your refrigerator (beer bottles, mayonnaise jars) and allow to sit for 24 hours.

Step 5After 24 hours, remove from the refrigerator and turn over the wrapped fish (you'll notice that brine has begun to fill the lower baking dish). Pour a little over the top of the fish, replace the weights and return to the refrigerator. (If there is a lot of brine in the bottom of the pan, pour it off; you don't want the bottom of the fish to touch it.) Allow the gravlax to sit for another 24 hours.

Step 6After a total of 48 hours in the refrigerator, remove the fish, unwrap, and scrape off the fennel-pepper mixture. With a very sharp knife, slice the fillets, one at a time, very thinly on a diagonal. Fan the slices out on a plate; serve with caraway creme fraiche.