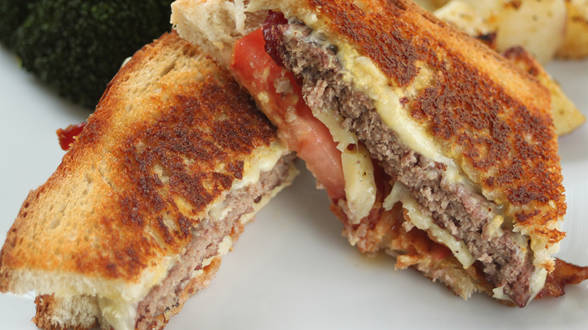 Place a medium size skillet over medium-high heat with one turn of the pan of EVOO, about 1 tablespoon. Add the onion to the pan and cook until tender, 4-5 minutes. Remove to a large mixing bowl and wipe the pan clean.


When the onion has cooled slightly, place the pan back over medium-high heat with two turns of the pan of EVOO, about 2 tablespoons. To the mixing bowl with the onion, add the sirloin, Worcestershire sauce and some salt and pepper and mix thoroughly to combine. Divide the meat into four portions and shape into four thin burgers. Add the patties to the hot pan and cook until golden brown and cooked through, about 4 minutes per side.


While the burgers are cooking, butter up one side of each slice of bread then flip them over and spread mustard on each.

Wipe out the pan that the burgers were cooked in and return it over medium heat. Add the stacks to the pan and cook until the bread is toasted golden brown and the cheese has melted, 2-3 minutes per side.

Serve with Chopped Veggie Salad alongside.