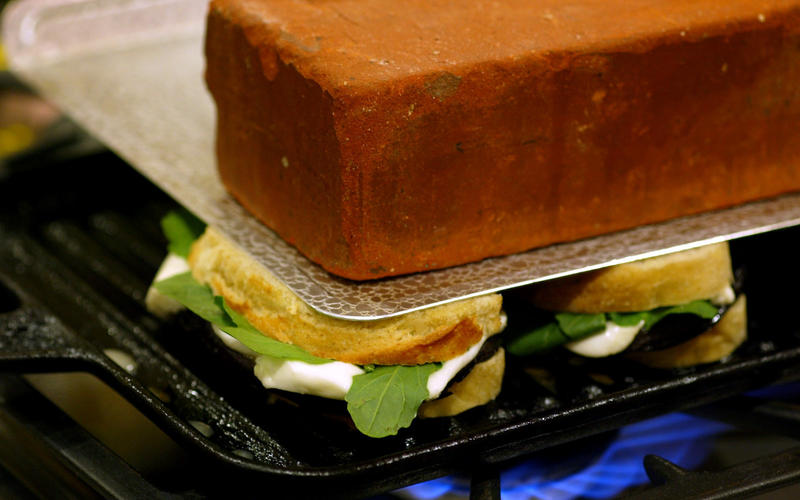 Step 1 Heat a grill pan over high heat, or heat an electric panini grill on the highest setting according to the manufacturer's instructions.

Step 3Brush one side of each slice of bread with olive oil. With the oiled sides of the bread down, arrange the eggplant, arugula and mozzarella on 4 of the slices, seasoning each layer lightly with salt and pepper. Top each with one of the other slices of bread, oiled side up. Season the outside of the sandwiches with salt and pepper. Reduce the heat to medium-high and place 2 of the sandwiches on the grill pan, cover with the baking sheet and again weight with the bricks. Cook until dark grill marks appear, 2 1/2 minutes, then remove the bricks and baking sheet and turn the sandwiches carefully. Weight them down again and cook 30 seconds. (For the panini maker, reduce the heat to 400 degrees, close the lid and be sure it makes even contact with the sandwiches. Cook until dark grill marks appear, 3 to 4 minutes.)

Step 4Transfer the sandwiches to a cutting board and cut in half. Serve immediately and repeat with the remaining 2 sandwiches.