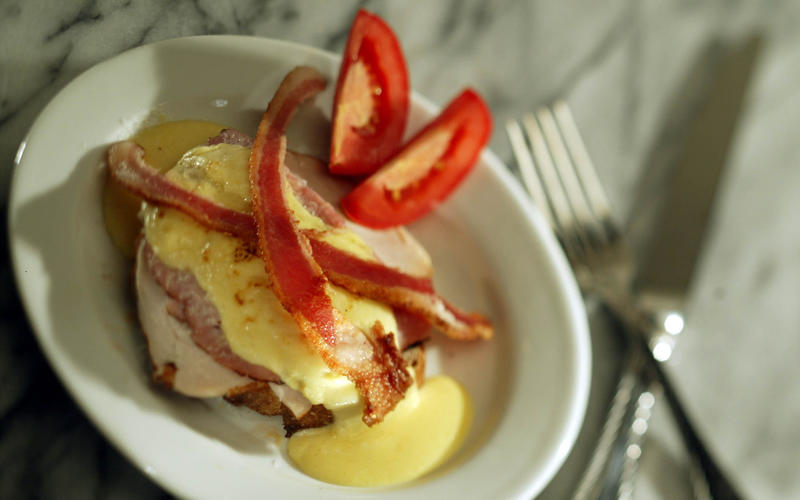 Step 1 Fry the bacon in a skillet over medium heat until crisp, 10 to 12 minutes. Cool, then break each strip in half. Set aside. Heat the broiler.

Step 2 Melt the butter in a heavy saucepan over medium heat. Whisk in the flour and stir until smooth and bubbly, 2 to 3 minutes. Slowly pour in the milk and half-and-half while continuing to whisk. Add the garlic and bring to a boil, whisking constantly. Cook until quite thick, about 6 minutes. Remove from heat and discard the garlic. Stir in the Cheddar until melted. Season with salt, cayenne and pepper to taste.

Step 3Arrange the bread on a flameproof baking sheet and toast under the broiler until just barely browned. Remove from the oven and flip each slice over. Place each in a gratin dish or other flameproof serving dish. Layer 1 slice turkey and ham on each slice of bread. Spoon cheese sauce lavishly over. Sprinkle each liberally with Parmigiano.

Step 4Run under the broiler until the cheese sauce is bubbly and the Parmigiano is browned. Remove from the broiler and crisscross 2 pieces of bacon on each. Arrange tomato wedges alongside and serve at once, with knife and fork.