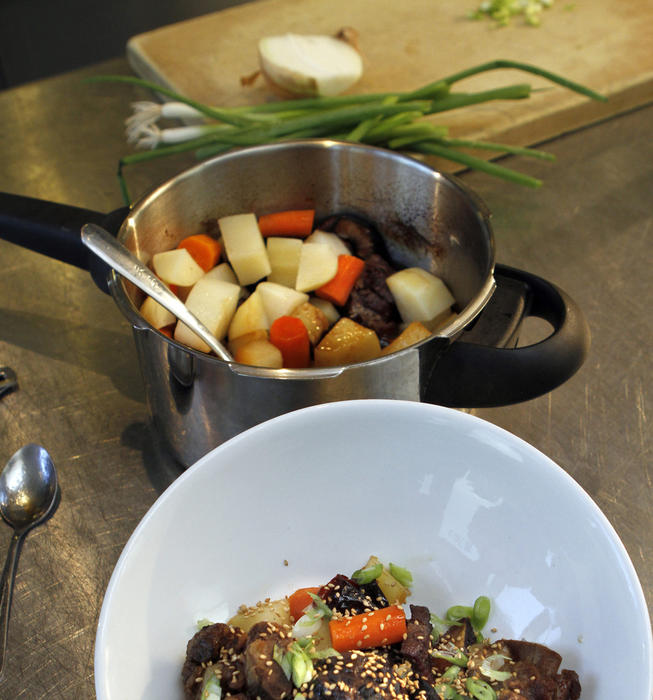 Step 1 Trim the short ribs of excess fat and cut between each bone. Make two vertical cuts in each piece of rib down to the bone. Season each piece of rib with one-eighth teaspoon salt, rubbing the salt on all sides of each rib to cover completely.

Step 2 Heat a saute pan (preferably cast iron) over medium-high heat until hot. Add the canola oil and sear the ribs in a single layer until browned on all sides, 8 to 10 minutes (the ribs may need to be seared in batches). Drain the seared ribs on paper towels and set aside.

Step 4In a 3 1/2-quart stove-top pressure cooker, combine the seared meat and soy mixture. Stir in the dried mushrooms and red dates. Cover and cook at high pressure (15 psi) for 1 hour. Start keeping time once it has come to full pressure, reducing the heat just to maintain pressure (but watch to make sure the cooker does not go below full pressure for the entire hour).

Step 5Manually release the pressure on the cooker, then open the top. The meat should be very tender when checked for doneness.

Step 6Taste the sauce and season again if desired; it should be sweet and savory. The volume of liquid should have increased after cooking for 1 hour. Gently stir in the daikon radish cubes, carrots and potato, along with the sesame oil and black pepper. Close the cooker and heat over high heat to bring the cooker back to full pressure (15 psi). Once the cooker has reached full pressure, remove from heat and allow the pressure to reduce naturally; do not release the pressure from the valve manually.

Step 7When the pressure is released, open the cooker. Check the vegetables; they should be tender. Cool slightly, then serve with a garnish of green onions and sesame seeds, along with a drizzle of additional sesame oil if desired.