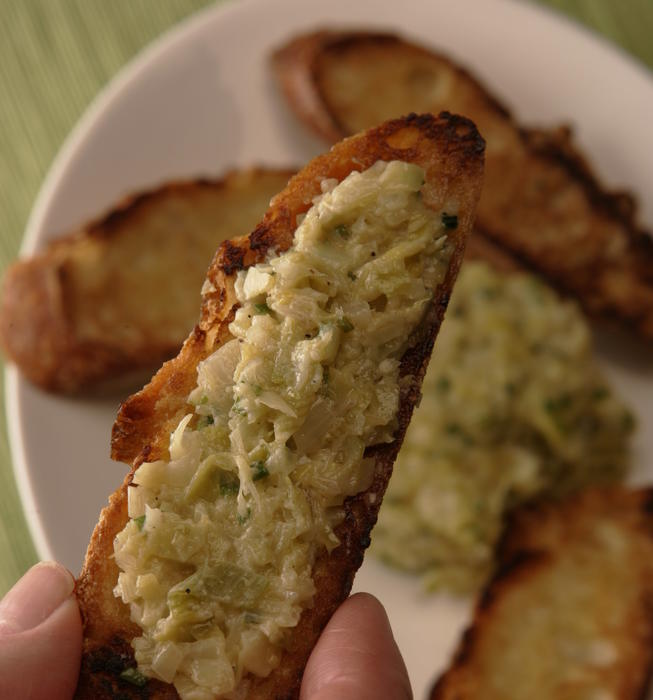 Step 1 Fill the bottom of a medium-sized steamer or double boiler with enough water to steam (but not so much that the water touches the steamer basket). Heat over medium heat so that the water comes to a simmer by the time you've prepared the leeks.

Step 2 Cut off the dark green tops of the leeks and discard or set aside for another use. Cut off and discard the root ends. Cut each leek in half lengthwise. Place each half cut side down and slice crosswise into 1-inch pieces. You should have about 1 1/2 cups of leeks.

Step 3Fill a large bowl with warm water and add the leeks to the water. Using your hands, separate the layers of leeks, and swish them in the water; the sand and dirt will fall to the bottom of the bowl. Let stand briefly. Then, with your hands or a skimmer, lift the leeks from the water without disturbing the sediment that has settled at the bottom.

Step 4Line a baking sheet with plastic wrap. Set a steamer basket in the pot over the simmering water. Place the leeks in the basket, cover, and steam for about 8 minutes, or until they are bright and almost translucent. Spread the leeks evenly on the lined baking sheet, and place in the refrigerator to cool, about 15 minutes.

Step 5When they're cool, chop the leeks until they are a thick mushy consistency. Place them on a double layer of cheesecloth or a clean kitchen towel, and wring out the excess water.

Step 7Place a 3-inch ring mold or round cookie cutter on a plate, fill with about one-third cup of the tartare, and smooth the top. Remove the cutter, and repeat with the remaining plates.