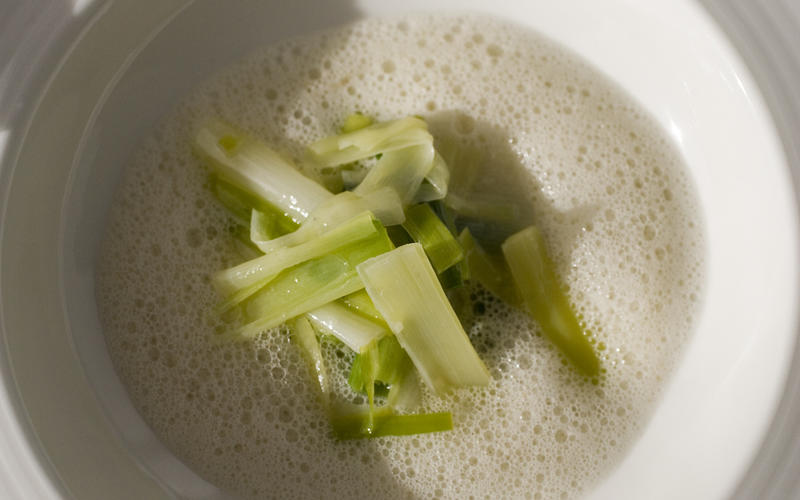 Step 1 Bring a small saucepan half full of water to a light simmer over medium heat. Use an oyster knife to open the oysters without losing their water. Hold the oyster with a thick potholder to protect your hand. With the oyster (cupped side down) in your palm, push the point of the oyster knife about 1 inch into the hinge of the oyster between the lid and the body. Twist the blade to pry the oyster open. Cut the muscle from the lid. Alternately, if using oysters from a jar, remove the oysters and place in the bowl, along with 2 tablespoons of the water from the jar.

Step 2 Place the meat and water from the oysters into a high-walled bowl (large enough to fit over the saucepan) and puree them until smooth with an immersion blender. Pass the puree through a fine mesh strainer.

Step 3Heat the puree over the saucepan of hot water until warm, then blend it again while adding the cubes of unsalted butter and the white wine vinegar. Move the sauce on and off the heat as needed to keep the temperature barely warm. The butter should melt, but should not make the sauce too thick; the sauce, during cooking, should coat the back of a spoon. Season with one-fourth teaspoon salt, or to taste. Reserve near the stove in a slightly warm space.

Step 4Cut each of the leeks lengthwise and run under cold water to clean and dislodge any dirt. Cut each half crosswise in 1-inch segments (for the medium leeks, slice each segment again into thirds lengthwise). In a medium saute pan, melt the salted butter over low heat. Add the leeks and cook covered over low heat just until tender. When leeks are cooked, take the pan off the heat, add three drops of fresh lemon juice and fleur de sel to taste.

Step 5Place the immersion blender back in the sauce, and blend so the sauce produces a good foam (you may need to blend between plating each portion to make the total amount needed for the recipe). To serve, place three tablespoons of foam in the center of a shallow soup plate. Place about 2 tablespoons leeks on top of the foam.