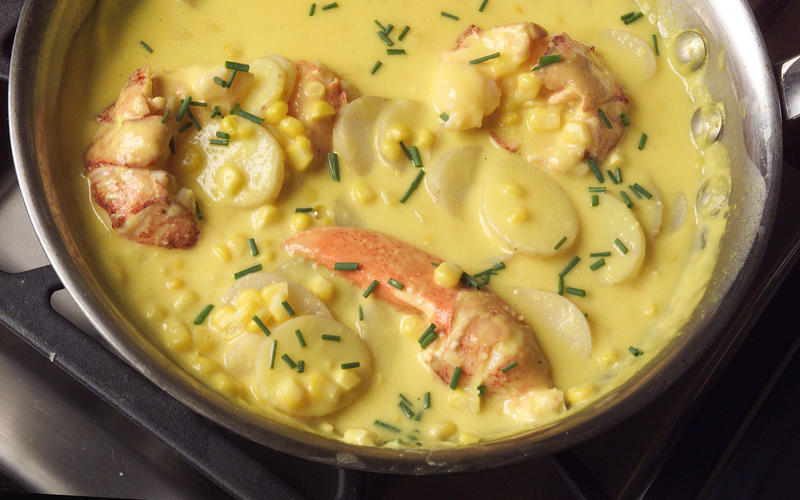 Step 1 Fill a large pot with enough water to completely cover the lobsters. Add the vinegar and bring to a boil. When the water boils, remove the pan from heat and submerge the lobsters in the water.

Step 2 Steep the lobsters until they turn red, about 5 minutes. Remove the lobsters from the water, twist off the knuckles and claws and return these to the hot water for an additional 10 minutes.

Step 3Separate the tails from the bodies of the lobsters (reserve the bodies for stock or discard them). Cut through the cartilage on the underside of the lobsters, pull them apart and pull out the tail meat in 1 piece. Cut the tails in half lengthwise, remove the vein and trim any loose strands.

Step 4Remove the claw meat intact by wiggling off the small lower claw, to which a piece of cartilage is attached (be sure to remove this cartilage if it separates) and by cracking the fat claw near its base to open and remove the meat without damaging it.

Step 5Remove the knuckle meat and reserve it for another use (it's great sauteed quickly in butter for a snack). Place all of the meat on a paper-towel-lined plate, cover it with plastic wrap and refrigerate until ready to use. (Allow the meat to sit at room temperature 1 hour before cooking if chilled).

Step 6Slice the potatoes into 1/4-inch disks and blanch them in plenty of rapidly boiling salted water until tender, 4 to 5 minutes. Remove them from the boiling water and plunge them immediately into ice water to stop the cooking, then pat dry with a paper towel and set them aside until ready to use.

Step 7Trim the kernels from 4 ears of corn and run them through a juicer. Alternatively, puree them in a blender with 1/3 cup water and then let them drain through a fine mesh strainer, pressing lightly on the corn in the strainer to get all of the juice. You should have 1 1/2 cups of corn juice.

Step 8Cut the kernels from the remaining 2 ears of corn and add them to the boiling water, cooking for 1 minute. Remove them from the boiling water and plunge them immediately into ice water to stop the cooking, then pat them dry with a paper towel and set aside until ready to use.

Step 9Slice the morels into lengthwise quarters. Heat the butter in a skillet over high heat. When it is sizzling, add the morels and cook, stirring constantly, until the mushrooms have softened, 3 to 4 minutes. Season lightly with salt and pepper and set aside until ready to use.

Step 1 0Place the shelled lobster meat in a pan just large enough to hold it all in 1 layer. Cover it with the corn juice and cook it over low heat, stirring constantly until the lobster is cooked through and the corn juice begins to thicken, about 3 to 5 minutes.

Step 1 1Add the corn kernels, potatoes and chives and season to taste with salt and white pepper.

Step 1 2Divide into 4 warmed serving bowls and garnish with morels and snipped chives.