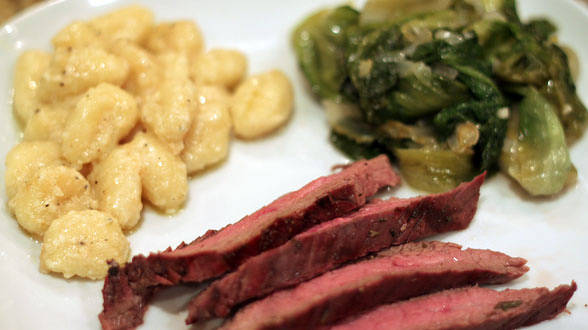 Bring a large pot of water to a boil. Add salt and boil the potatoes in their skins to tender, 40-45 minutes. Turn off the heat, remove the potatoes and reserve the starchy cooking water. Cool the potatoes for a few minutes, until just cool enough to touch but still hot.


Quarter the potatoes and scrape away the skins with a sharp paring knife. Mill the potatoes into a crumbly mash with fork tines or run them through a ricer onto a work surface. Make a well in the potatoes and let them cool completely. Season with fine sea salt and nutmeg, then spread flour around the potatoes. Add the egg to the well and begin to mix it into the potatoes. Once incorporated fully, gently knead the potato dough for a few minutes, then cut into eight pieces. Roll each piece into a 1-inch dowel, then cut the gnocchi with a small, sharp knife. Press the gnocchi with the tines of a fork to create ridges.


Return the reserved water to a boil. Drop in the gnocchi and cook until they float. Remove with a slotted spoon and toss simply with brown butter and cheese (see below), pesto or red sauce of choice.

Gnocchi freezes well! To freeze, toss the uncooked gnocchi with a drizzle of oil and arrange in a single layer, so they lie flat, in freezer-safe resealable plastic bag.


For the Red Wine and Garlic Marinated Sliced Steak:

Pat the meat dry and season with kosher salt and a liberal amount of coarse black pepper. Whisk together the wine, garlic, rosemary and EVOO, then add to a large 2 gallon resealable plastic bag. Add the meat and seal the bag, pushing out most of the air. Set the meat flat and rub with your hands to distribute the marinade evenly. Refrigerate for several hours.

Bring the meat to room temperature. Pre-heat the broiler and set an oven rack one notch up from the center.


Shake off the excess marinade, place the beef on a broiler pan and broil for 5 minutes on each side for rare, 12 minutes total for pink center or medium. Let the meat rest for 5-10 minutes, then thinly slice against the grain.

Dress each portion of sliced steak with a little lemon juice, a pinch of sea salt combined with parsley and a drizzle of EVOO.

In a large skillet, heat the EVOO over medium heat. Add the onion and garlic and cook to soften, 8-10 minutes, stirring occasionally. Wilt the escarole into a pan; season with salt, pepper and nutmeg. Add the stock and lemon zest and simmer gently, 10-15 minutes. Remove with a slotted spoon to drain away excess liquid.


For the Brown Butter and Black Pepper Gnocchi:

Bring a large pot of water to a boil. Add salt and cook the gnocchi until they float. Reserve 1/2 cup of the starchy cooking water before draining.

Meanwhile, melt the butter in a saucepot over medium heat. Add the pepper and stir until the butter is light