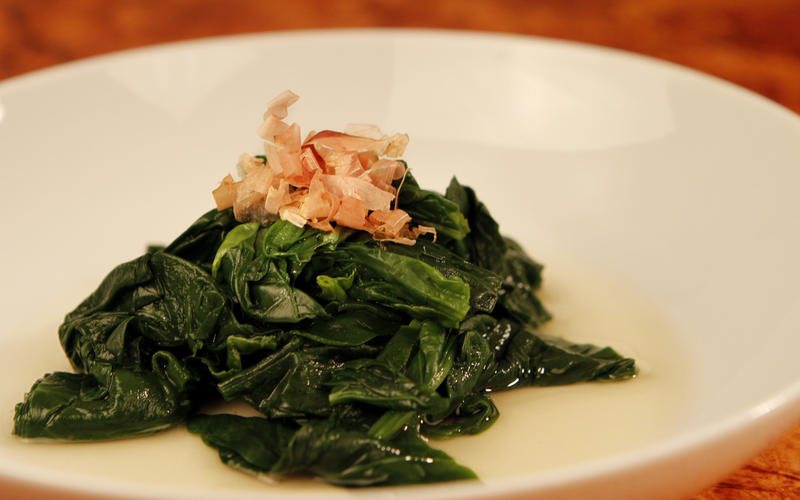 Step 1 Season a large pot of water with a pinch or two of salt and bring to a boil over high heat. While the water is coming to a boil, prepare an ice bath.

Step 2 Gather the stems of the spinach so the leaves are all facing the same direction. Blanch the spinach until it begins to wilt, about 15 seconds. Remove the bunch from water and immerse it in the ice bath to chill. Drain and set aside.

Step 3Split the blanched bunch of spinach into thirds. Halve each bunch of spinach and place both halves on a sushi mat, the end of each half pointing in the opposite direction. Roll the spinach in the mat to remove excess water; you may also use your hands to press the excess water out of the spinach roll. Repeat with the remaining two-thirds of the spinach, halving each third and rolling out. The spinach can be made up to this point one day in advance; wrap each of the 3 spinach rolls in plastic wrap and refrigerate until needed.

Step 4Make the dressing: In a small saucepan, combine the dashi, soy sauce, one-half teaspoon salt and mirin and bring to a boil over medium heat. Remove from heat and set aside until cool.

Step 5Place the rolls in a non-reactive container and gently pour over the seasoned dashi to cover. Cover the container and soak the spinach rolls in the dashi for 2 to 3 hours in the refrigerator.