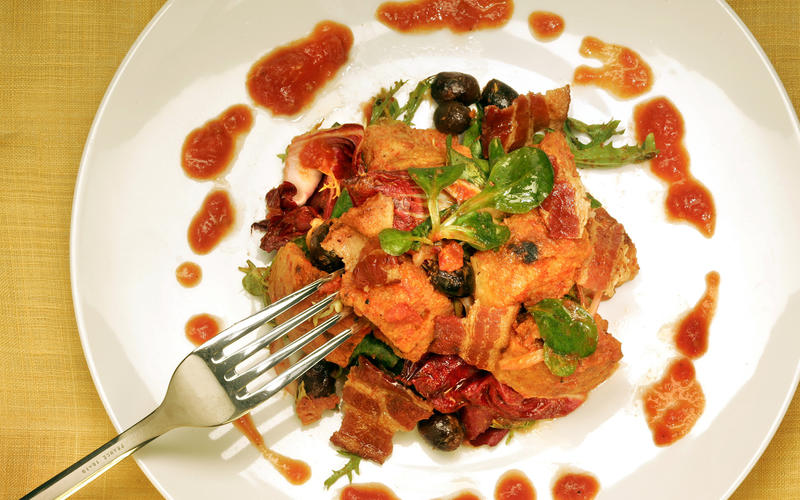 Step 1 In a large saute pan, cook the bacon strips over medium heat until the fat is rendered and the strips are crisp, about 10 minutes. Drain the bacon on paper towels, reserving the bacon grease.

Step 2 In the same skillet, heat 2 tablespoons of the bacon grease over medium-high heat. Add the garlic cloves and as many cubes of bread as will fit in a single layer (this may need to be done in a couple of batches). Toast the bread until golden brown on all sides, stirring frequently. Add additional grease as needed (the bread will soak it up as it toasts), up to 2 more tablespoons. Remove from heat and place the bread in a large bowl.

Step 3Make the tomato vinaigrette: In a large nonreactive saucepan, whisk together the crushed tomatoes, remaining one-half cup bacon grease, sherry vinegar, salt and several grinds of pepper. The grease will thicken as it cools; if necessary, heat the vinaigrette gently over low heat while whisking until the dressing is emulsified.

Step 4Pour half the dressing over the toasted bread and toss with your hands until the cubes are evenly coated. Add the onion, olives, basil and oregano and toss until evenly incorporated. Allow the dressing to soak into the cubes to desired tenderness, 10 to 15 minutes if you like the bread soft on the outside with a little crunch in the center.

Step 5When the bread is soaked, add the radicchio, frisee and mache; toss to combine. Add additional dressing as needed to lightly coat the leaves.

Step 6Plate individual servings of the salad or serve in a large serving bowl. Crumble the bacon slices over and serve immediately.